NEXT
The End of the Bison 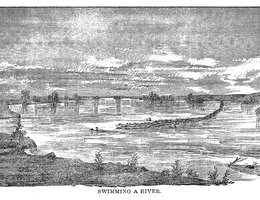 The creation of the Union Pacific and Southern Pacific Railroads solved that problem. Texans could drive their cattle north to meet the railhead where they could be shipped to Chicago and the eager demand of the American people.

Trail drives were hard work and required tough men to work them. James H. Cook trailed Texas cattle in the 1870s and later established a ranch at Agate Springs, Nebraska. 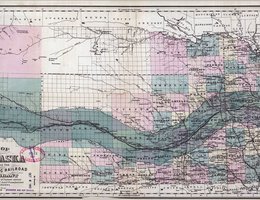 Map of Nebraska showing the Union Pacific Railroad land grant, 1879. Note: Turquoise marks the railroad’s intended path, the 20 miles of land on either side of the track granted to it for building purposes.

Find out more about the grit and forbearance of the early cowboys along the Texas Trail.
From the 2008 NET Television production Beef State 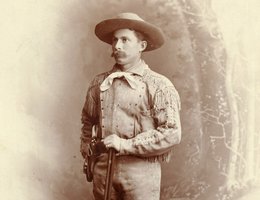 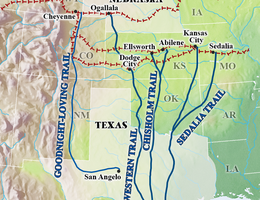 "Slight things threw the cattle into confusion and then a hurly burly scene followed. A horse wearing his saddle lies down to roll; when he rises the stirrups fall, and striking him in the sides give him fright; he springs to the length of his tether, snaps it and dashes into the herd. Up jump the steers in alarm; every one that comes to his feet causes a dozen others to bound to theirs; and now, as if by electric impulse — quick as lightning — the whole herd shaken with terror, plunges in one direction. . . .

"The alarm has brought every man to his feet. Stopping for nothing, caring for nothing but the one supreme object of overtaking, following, and at the first practicable moment turning and controlling the stampede, those quickest to think and act, seizing their saddled horses . . . The flight is so swift that some of the riders lose the herd entirely. Others overtake them; and then these begin that slow, soothing, reassuring wordless song with its long sustained notes peculiar in quality of sound, known to every cowboy on the Texas trail . . ."
—James H. Cook as told to Eli S. Ricker, May 23, 1907

Cook’s description of life on the Texas Trail

By 1868, Texas herds were reaching railheads in Sidney, Ogallala, and North Platte. Soon ranches sprang up, and the Nebraska cattle empire was born.

Read about some of the clothing and equipment that the "cowboys" used in this time period.

NEXT
The End of the Bison