NEXT
Villasur Sent to Nebraska

In 1714, a French explorer with a long name — Étienne de Veniard, Sieur de Bourgmont — reached the mouth of the Platte. He named it the "Nebraskier River," using an Oto word that means "flat water." Bourgmont had been in North America for 27 years and was a remarkable soldier, trader, and explorer. When he reached the Missouri territory he married a Missouria Indian woman and lived with the tribe. While living with them, he began to carefully explore the Missouri River and record his observations. It was on one of these trips that he reached the mouth of the Platte. 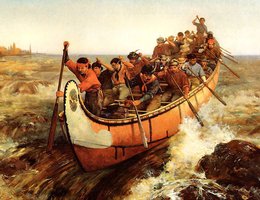 Shooting the Rapids, by Frances Anne Hopkins, 1879
French explorers used canoes and dugouts to travel throughout the interior of the New World. Courtesy of National Archives of Canada

In 1724, he was sent to create peace treaties among and between the plains tribes. The goal was to secure the expanding fur trade for the French.

All of the chiefs of these tribes replied: "Yes, my father, we will keep our word, and we have no other wish than yours. Our only grievance is to see ourselves so far away from the French, for we often lack merchandise, especially gunpowder and balls."

M. de Bourgmont replied: "My friends, I shall send Frenchmen to your villages to bring you some."

They answered: "That is good, for we have many peltries, especially beaver. We will trade them with your people. They will be very pleased and so will we."

By the early 1700s Spain claimed the southwestern regions of what would become the United States. Britain had claimed all of North America in 1497 and had colonies in the east and Canada. France controlled the area along the Mississippi River. In the west, no boundary had been drawn between the claims of Spain and France. There were many land disputes. The Spanish government felt that trade across the continent should be conducted only by its citizens. None of the profits would go to other countries. The French and the British did not agree.

The French moved on to the Plains via the Mississippi, Arkansas and Missouri rivers to take advantage of the expanding fur trade. They opened regular trade with the Indians of the central Missouri River basin (including Nebraska) by 1703. They concluded treaties of peace and friendship with the Missouri River tribes. French presents and trade goods flowed up the Missouri and overland from the Great Lakes to the tribes in Nebraska.

The French supplied guns and steel weapons, which gave the Pawnee, Osage, Missouria, Kansa, and Wichita great military advantage over their enemies, the Apache. However, the Spanish did not have enough firearms to supply their own people, and prohibited gun sales to all Plains tribes. That put them at a disadvantage against the French and British. 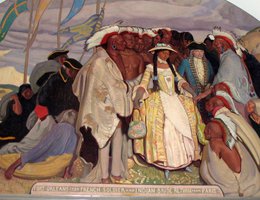 Éttienne de Veniard, sieur de Bourgmont was the first known white man to systematically explore the Missouri River basin and was the first to record his findings. After leaving France a convicted juvenile delinquent, Bourgmont settled in Canada and joined the military. When an Indian attack on Fort Pontchartrain (near modern day Detroit) damaged Bourgmont’s reputation, the acting commander escaped to the wilderness. He lived with Indians for years at a time and became a notorious and powerful figure among the them, eventually becoming the king’s personal envoy to the tribes that complicated France’s desire for western expansion.

NEXT
Villasur Sent to Nebraska