NEXT
The Mighty Mo 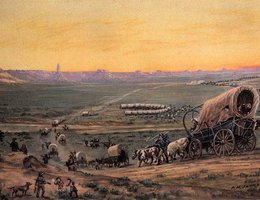 The first Europeans to see the West were soldiers, explorers, mountain men, trappers, and traders. At first they followed the rivers and streams into the West, but eventually most realized that rivers couldn’t take you everywhere you wanted to go. And so overland routes were blazed.

Fur traders were among the first white men to follow Indian trails that eventually became a blueprint for parts of the Oregon Trail. They learned the lay of the land, identified travel routes, and introduced Indians to white men’s ways.

The explorers painted pictures of lush lands up for grab in the Far West. Settlers had expanded west as far as the Great Plains. The plains themselves were considered desolate and fit only for Indians. The government negotiated treaties with the tribes, reserved land for them, and encouraged European settlement on the Great Plains. Yet most settlers preferred to continue their march to the west coast.

"If hell lay to the west," went a 19th-century saying, "Americans would cross heaven to get there." It may have appeared that way with over 300,000 people traveling west along the Oregon-California Trail in the mid-1800s. However, if you would have asked the pioneers of that time period, they may well have replied they were crossing hell to reach heaven.

NEXT
The Mighty Mo