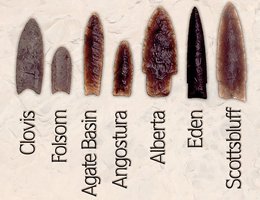 The oldest known Indian tool found in Nebraska is the Clovis point, made about 10,000 B.C.E. It is a spear point with a groove or flute, at its base. Attached to a shaft, this spear point was capable of penetrating an elephant’s hide. The Clovis culture takes its name from the town in New Mexico where the striking stone projectile point characteristic of this culture was first found. The chipped flint points known as Clovis points and a variety of additional stone tools artifacts are dated from 10,000 to 9,000 B.C.E. Its distinctive characteristics include a central groove, or flute, along both of its faces and finely worked edges.

The Folsom culture takes its name from Folsom, New Mexico. The artifacts recovered at this site included chipped flint points and a variety of other stone tools. The remains of large mammals, particularly extinct varieties of bison, were also found at this site. The remains date from 9,000 B.C.E. and 8,000 B.C.E. (or 11,000 to 10,000 years ago). 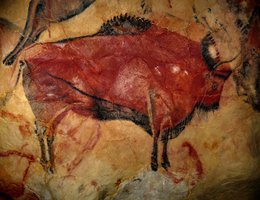 These points were actually integral parts of a weapons system. Points were usually fastened to a short foreshaft, and then that foreshaft was inserted into the body of the lance. When they were hunting big game like the mammoth, Clovis and Folsom people would probably thrust the weapon into the animal, breaking off the foreshaft. The sharp point and foreshaft would then be free to do further damage to internal organs, speeding the kill. Toward the end of the period, they also began using the atlatl, a hand-held throwing stick that increased the power of the spear.

Two of the Paleo-Indian point types, Meserve and Scottsbluff, were first found at, and named for, locations in Nebraska. Many other types of spear points have also been found in Nebraska — Plainview, Folsom, Hell Gap, Agate Basin, Alberta, Eden, Frederick, Lusk, and Brown’s Valley. Sites abandoned by some of these Paleo-Indian cultures have been excavated in western Nebraska.