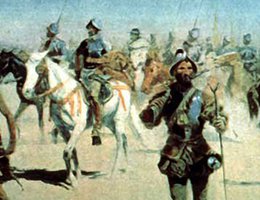 Coronado sets out to the north, looking for "Quivira", his mythical city of gold, by Frederic Remington
Courtesy Texas Council for the Humanities

The first recorded contact between Europeans and native people on the Central Plains came between the Spanish and the Wichita tribe in what is now Kansas. Contact with the French and the British came decades later. Contact with the Americans came a century or more later still. Very slowly at first, but inexorably, these contacts would change the lives of native people.

Christopher Columbus landed on an island in the Caribbean in 1492 CE. Within a few decades, Spain had begun to conquer many of the peoples of the Western Hemisphere and to establish Spanish settlements. Spanish traders and soldiers gradually moved northward. Commerce became the common language between Native Americans and Europeans.

Around 1540, the Spanish sent Francisco Vásquez de Coronado to put down an uprising in New Mexico. He did and took up residence with 230 soldiers and 800 servants among the Pueblo Indian tribes. That year, a Spaniard attacked a Native American woman. Coronado refused to punish him, and the Indians retaliated by stealing horses. Punishment was swift as 200 men were burned at the stake, but this may be the first time native people obtained horses.

At least one historian suggests that the Pueblo Indians may have repeated stories of fabulous cities of gold to the east in order to entice the Spanish to leave. Quivira was the name of this fabulous kingdom, where even the poorest people ate from plates made of gold. Whatever the motive, Coronado believed the stories, and in 1541 launched an expedition into the Plains. Unfortunately for the Pueblos, he only took 40 conquistadors with him. 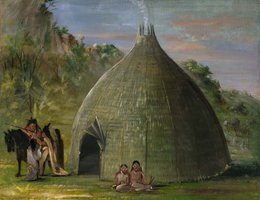 Coronado’s flying column reached where they thought "Quivira" was when they reached central Kansas. They found no gold. Instead they found villages of the Wichita tribe. The Wichitas lived in fascinating conical houses made of poles and grass. They had an economy based on gardening and hunting very much like the Pawnee. In fact, a delegation of Indians from the province of Harahey further to the east visited Coronado at the Wichita village. They were related to the Wichita and were probably Pawnee. So, stories about these new European visitors probably circulated through the plains tribes as early as the 1540s.

After strangling the scout who had told him the tales of gold, Coronado returned in humiliation to Mexico. But for the next 250 years, Spanish explorers would search for the treasure they thought Coronado had missed. The Spanish also sought trade with native people — including trade in slaves, buffalo robes, dried meat, and leather in exchange for horses, sword blades for lances, wool blankets, horse gear, turquoise, and agricultural products, especially dried pumpkin, corn, and bread.

When, in 1578, the British sea dog Sir Francis Drake raided and claimed the Pacific coast, the Spanish were convinced that he had found the fabled Northwest Passage across the continent. That would open trade routes to East India. In response, the Spanish established the first permanent settlements and forts at Sante Fe, New Mexico, in 1598. Individual French traders began exploring and trading on the Plains in the late 1600s. The first recorded European exploration of what would become Nebraska was the expedition of Frenchman Étienne Veniard de Bourgmont in 1714. On the other hand, the first Native Nebraskan to see Europe many have been an Oto man who was willingly taken to meet the King of France in 1725. By that time, even the American colonies on the Atlantic coast were sending trading parties west.

These trading forays made the Spanish nervous, and the next century saw a series of tentative attempts to conquer the vast territory of the Central Plains. That proved to be a daunting task, but the effort had profound effects on the people already living here.