NEXT
Mackay, the Otos & Omaha 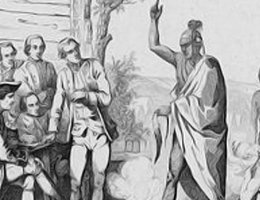 Throughout the 1700s, the nations of Europe played out political dramas on the plains of Nebraska. Successive expeditions would venture forth and negotiate with the plains tribes, offering symbolic gifts — certificates heralding "peace and friendship," peace medals, canes and flags. Towards the end of the century, the gifts given by the Spanish to tribes west of the Mississippi River cost that one colonial power over $100,000 a year. The goal of the whites was to establish alliances and dominate trade. However, each tribe, and each country, had its own competitive interests at heart, and peace became a scarce commodity. Friendships came and went. The introduction of guns by the Europeans to the Plains Indians made the situation even more difficult. 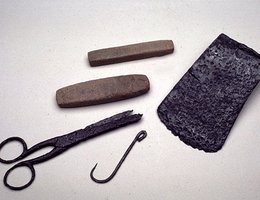 The problem was trying to govern what was, to the Europeans, a vast wilderness. In 1610, the Spanish had established Santa Fe, New Mexico, and attempted to control land west of the Mississippi all the way to what is now Canada. But after Villasur’s defeat, it was obvious that Santa Fe was too far south.

The French had ventured down from Quebec. In 1682, La Salle had traveled down the Mississippi River and claimed its enormous drainage basin for France. He named the territory Louisiana after the French King Louis. Two years before the Villasur expedition, the French had established New Orleans, realizing that whoever controlled the mouth of the Mississippi could control trade between the vast North American interior and the world across the Atlantic Ocean. As early as 1699, they began to establish settlements and forts in the interior near where the second great continental river, the Missouri, empties into the Mississippi. Eventually, St. Louis was established near here.

In 1739, Pierre and Paul Mallet left Mackinac Island with eight or nine men to trade with the Pawnee in Nebraska. Then they proceeded overland to Santa Fe, where they sold their goods for high prices. The Mallets were treated well by Spanish authorities. But as the number of foreigner traders increased, the Spanish renewed their objections to French trade. When Pierre Mallet made a third trip to Santa Fe in 1750, he was sentenced to life imprisonment and sent to Spain in chains as a galley slave.

The British, of course, had their own designs on the interior of the continent. As early as 1609, the English king had granted colonists the right to settle the entire continent "from sea to sea" in a huge band running straight west from their colonies on the east coast. In 1749, a group of Virginian business owners secured specific grants from the British government for over 500,000 acres of Ohio valley land.

All of this tension and conflicting claims boiled over into a global war that eventually affected life on the Central Plains. 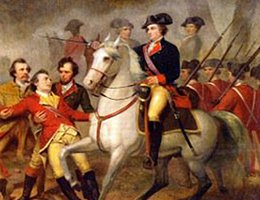 George Washington as Captain in the French and Indian War by Junius Brutus Stearns, circa 1849-1856
Courtesy Virginia Museum of Fine Arts

The conflict began as the "French and Indian War" in the New World. Two years later, it became the "Seven Years War" all over the globe. England was at war with France. All but one of the eastern tribes allied themselves with France. Towards the end of the war, even Spain allied itself with France in order to prevent the British from dominating the New World.

The first battle of the war was fought by a young Gen. George Washington who was sent by the British into the Ohio Valley. He lost a third of his men at Fort Necessity and surrendered. After war was formally declared, the British sent their own troops west. They lost. It was not until the British began asking their American colonists to help — instead of simply taking supplies, equipment, shelter and manpower — that the tide of the war began to change.

In 1759, the British negotiated with the Indian tribes around Fort Duquesne (near present-day Pittsburgh), and established peace with them. The French realized they no longer had Indian allies and quickly abandoned the fort. It was the beginning of the end of the war. In September, 1760, the French army surrendered in Montreal. Britain now controlled all of the eastern seaboard, from Florida into Canada. 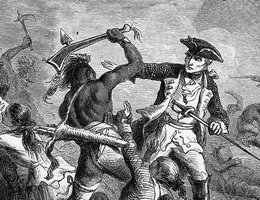 The French, however, made a secret treaty with the Spanish and gave them all of Louisiana, the territory from the Mississippi River west. At roughly the same time, a French fur trader from New Orleans, Pierre Laclede Liguest, established a new trading post and named it St. Louis, believing he was still in French territory. A year later, in 1764, news of the secret treaty finally reached St. Louis along with the news that Spain was making the village its new territorial capital. During these early days, the culture was French even though the government was Spanish. Spanish control of St. Louis was the key to what influence the Spanish had among the Indians of the Missouri and Mississippi basins.

What the end of the French and Indian war meant to the Native Americans on the plains is that a good portion of the British and American colonists were hostile to native tribes. Almost all of the tribes in the east had allied with the French, and so there was little sentiment among the Americans to protect tribal rights as the colonists looked west for new land. The relentless push of native people west had begun.

For the American colonists, the end of the French and Indian war set the stage for the American Revolution a decade later. With France removed from the interior, Americans lusted after the new land, but the British government wanted to slow and control that population movement. They issued a royal proclamation that prohibited settlement west of the

— and to enforce that ban on colonial expansion the King set up an army of 10,000 British to be paid for by taxes on the American colonists! The Americans had seen what could happen when all 13 colonies united behind a shared purpose, and they began to imagine their independence.

NEXT
Mackay, the Otos & Omaha