In the 1880s, a new, more radical group attracted new members. The Farmers’ Alliance got off to a slow start. Their second state convention was planned to be held in August, 1882. But it was not well advertised and came in the midst of a harvest season. Only 15 people showed up.

View the The Farmers’ Alliance posters

But as hard times developed, the Alliance grew. By 1890, the Alliance claimed 1,500 local chapters and 50,000 members in Nebraska. At that time there were about 500 (mostly weekly) newspapers in the state, and 174 of those were sympathetic to the Alliance’s cause. That year, the Kearney Weekly Hub reported on one of their rallies, saying there were "Just Scads of Them".

Read the story,  from the Kearney Weekly Hub 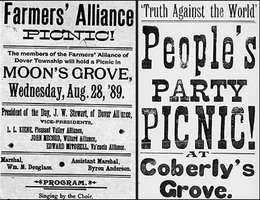 Times were tough. For almost a decade in the 1880s, nature had been kind and the plains produced good crops. But prices kept declining. Many farmers didn’t understand how increasing supplies of goods translated into less demand and lower prices. By 1890, corn prices had dropped to 10 to 20 cents per bushel. Wheat was at 50 cents. Oats were at 15 cents. The Alliance said the problem was the railroads, eastern banks and industrial monopolies. And then a drought hit.

In 1890, the Farmers’ Alliance had become a radical organization facing desperate times. At their convention in the spring, they drafted a Declaration of Principles that supporters were invited to sign. The document called for the government ownership of railroads and telegraph lines, the abolition of land monopoly, the free coinage of silver to inflate the value of crops, and lower taxes so that "our laboring interests will be fostered and wealth bear its just burdens." Within 30 days, 15,000 voters had signed the petition.

At that same convention during the spring of 1890 The Alliance accomplished something even more important — they called for the organization of a new political party at a meeting in July. That convention produced the Populist Party.

When it was established, the Alliance’s constitution had declared they would be non-partisan. But more and more members felt that the old political parties didn’t offer any hope. The Democrats were still the party of the Southern rebels from the Civil War. Democrats were dominated by Catholics and were opposed to prohibition, which many of the Protestant farmers supported. The Republicans, on the other hand, were openly hostile to progressive causes.