Concerns about nuclear war also had an effect on government. There was a rush in the 1950s and 60s to provide shelters for governmental agencies and bodies. 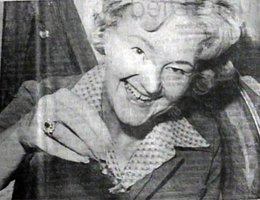 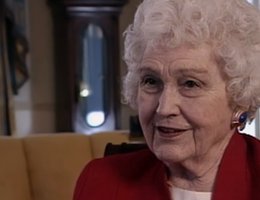 Maxine Morrison, wife of former Gov. Frank Morrison, was not impressed with the size and condition of the Nebraska governor’s mansion’s shelter
From the 1999 NET program, Remaking a Mansion for First Families

Former Govenors Exon and Morrison revisit the cramped fallout shelter under the Governor’s Mansion.
From the 1999 NET program, Remaking a Mansion for First Families

Nebraska state government also felt the need to provide a way to keep operating in the case of an attack. At the governor’s mansion, the state built a small shelter off the basement. Despite the serious intent behind the shelter, at least the first two governors to live with the shelter weren’t all that impressed. Gov. Frank Morrison and his wife, Maxine, thought it was a dank place they would rather not go. Gov. J. J. Exon’s wife, Pat, decided she could put that quality to good use — she grew night crawlers in the shelter to support her favorite hobby, fishing.

The state also built an Emergency Operating Center in 1963 behind the National Guard headquarters at the Lincoln Airport. It quickly became known as the "Underground Capitol".

On the surface, the Underground Capitol doesn’t look like much. There’s a small brick building, a sign and a tall antenna. But, below ground is a fortified bunker with enough room for 209 people. State government could operate from the bunker during an emergency, like a nuclear attack or natural disaster. Space was provided for the leaders and one or two key people from most state agencies. The most prominent agencies were the Department of Roads, State Patrol and Fire Marshall. Space was also provided for storage of reference data that would be used by them during a national emergency.

There were enough supplies for the people to exist for up to 30 days after a nuclear explosion. Food, water, sanitation, paper, pencils, and other equipment and supplies were available so state employees would not have to leave the underground facility for any reason. Stand-by generators could power the Underground Capitol if a power outage occurred. After a nuclear attack, air would be routed through chemical, biological, and radiological filters to purify the air coming into the structure. The heart of the installation was the communications room with radios, telephones and, later, computer networks.

Today the bomb shelter is home to the Nebraska Civil Defense Agency and is used for emergency operations during natural or man-made disasters. For example, in 1993 a violent windstorm hit eastern Nebraska, and the center allowed 35 civil defense officials to control the emergency response. There is also a green telephone in the center with an ominous-looking bulb on top and a red telephone nearby — these are direct lines to the Cooper and Fort Calhoun nuclear power plants. While the threat of nuclear war has diminished, the potential for nuclear accidents still exists. Also, depleted nuclear material is transported across the state frequently and some nuclear weapons still remain in western Nebraska.

The Underground Capitol was built to be safe from radiation. But it’s not safe from Mother Nature. Leaks have developed in the 42-inch thick ceiling, and rain now seeps in.