NEXT
Moses Merrill The Missionary Spirit 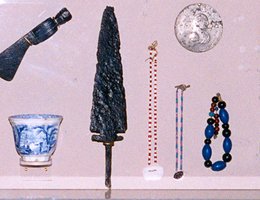 Typical trade goods of the period

After Manuel Lisa died, the remaining partners signed a new contract, and Joshua Pilcher became the field representative in charge of the company’s outposts and their fur traders. It was primarily through his efforts that the reorganized company enjoyed a degree of success. He was a merchant and banker in St. Louis, but had joined Lisa’s company due to personal financial problems. He was a junior partner and served an apprenticeship as a trader among the Indian tribes in what was to become northeastern Nebraska.

From 1820 until at least 1824, Pilcher’s primary base of operations on the Missouri was a trading post built by Manuel Lisa. The post is believed to have been about five miles southeast of present-day Fort Calhoun, Nebraska. Shortly before the Lisa post was abandoned, newer quarters were built at Bellevue around 1822 or 1823 and became the field headquarters and trading post of the Missouri Fur Company under the direction of Pilcher.

The period of expansion and relative success for the company was abruptly ended during the summer of 1823 when one of the company’s largest parties of fur trappers was attacked by a Blackfoot war party near Priors Fork on the Yellowstone River. Seven men were killed, Pilcher estimated that the company lost upward of $15,000 in goods and pelts. This battle plus another one with the Arikara at their village near the mouth of the Grand River in northern South Dakota, for all practical purposes, brought an end to the Missouri Fur Company. However, despite the reversals suffered by the company, it was not dissolved until the original contract expired in the fall of 1824.

Pilcher did manage to acquire a stock of goods valued at $3,175, but he was unable to compete with the newly emerging American Fur Company and found it necessary to divide the trade with John P. Cabanne, a representative for the American Company at Council Bluffs. 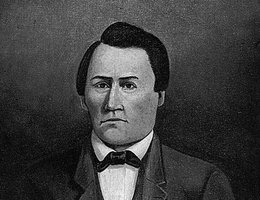 Lucien Fontenelle was son of a wealthy New Orleans family, but he had run away when he was a young boy. He became involved in the fur trade and later worked for the Missouri Fur Company at the Omaha villages in northeast Nebraska. He married an Omaha girl, Bright Sun, and his oldest son Logan became an Omaha chief.

Fontenelle and Pilcher formed a partnership with some other men in 1825 and they set out on a fur-trapping expedition to the Rocky Mountains, but the venture was not profitable and the partnership was disbanded in 1828. Pilcher stayed in the mountains for three years and then replaced Cabanne as a representative of the American Company at Council Bluffs. Fontenelle purchased the Bellevue post.

When Fontenelle took possession of Bellevue, it was still primarily a trading establishment. With the disappearance of larger game animals such as deer and bison, it became necessary to produce domestic foods and farming became a necessity. Visitors were impressed with the size and quality of Bellevue’s livestock and fields. Bellevue was one of the last outfitting stations and supply points along the Missouri River for fur trappers who were destined for the trapping grounds in the Rocky Mountains. The bison range, the next dependable source of food, was about a two-week journey from the Missouri River.

In 1832, Fontenelle sold his Bellevue station to the United States government for use as the headquarters of the Indian agent to the Omaha, Pawnee, Oto, and Missouri tribes, and he built a new home and trading post a few hundred yards down the Missouri River.

Lucien Fontenelle spent the last decade of his life operating the post and making yearly trips to the Rocky Mountains for the American Fur Company. On several occasions he spent the winter in the mountains and became acquainted with famous mountain men like Kit Carson and Jim Bridger. But they were no more important or of any greater stature during the heyday of the fur trade than Lucien Fontenelle. He operated the post until his death in 1840. 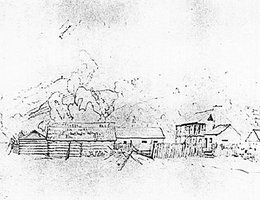 Another of Fontenelle’s friends was Peter A. Sarpy whose role in the early history of Bellevue is both controversial and cloudy. Details of Sarpy’s early life are sketchy at best, but after 1832 his activities are fairly well documented.

Sarpy probably came to the Nebraska Territory in 1823 to work at the American Fur Company’s trading post near Bellevue. He was employed by his brother’s father-in-law, John P. Cabanne. Some time later he established a trading post for white traders on the Iowa side of the Missouri River, and he named it the "Trader’s Post." The post at Bellevue mainly served the Indians.

In October of 1832, he was involved in an illegal seizure of a keelboat belonging to a company in competition with the American Fur Company. He and some other employees of the American Company were ordered to seize the keelboat by John P. Cabanne. By June of 1833, Cabanne and Sarpy were ordered out of the Indian Territory as a result of the affair. But, both men were notified they could return if they applied for a permit from the superintendent of Indian Affairs in St. Louis. Pilcher was then hired to replace Cabanne in 1833. His tenure at Council Bluffs was brief, and in 1835 he left to accept a position in the Office of Indian Affairs at an agency on the upper Missouri. Pilcher’s replacement was Sarpy. 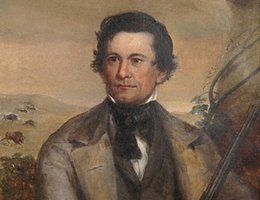 According to Henry Fontenelle, Lucien’s son, Peter A. Sarpy occupied Lucien’s trading post in 1840. By 1842, Bellevue was experiencing a period of relative calm. The fur trade was on the decline, and the days when Bellevue served as the "jumping off place" for the trappers bound for the Rockies were gone. Yet like the Phoenix which rose from its ashes, Bellevue once again achieved prominence in the latter half of the decade with the arrival of Mormon immigrants and other settlers bound for Oregon and California.

Sarpy started a ferrying business across the Missouri between Bellevue and St. Mary’s on the Iowa side. In 1847 he ferried the Mormons across the Missouri, helped supply them with food and clothing for the winter, and the following spring helped outfit them for the remainder of their travels. During the gold rush years, Sarpy’s ferryboats hauled many of the would-be gold miners across the Missouri.

Sarpy became a leader in both commerce and politics for more than twenty years. He helped establish a post office and along with others in the Old Town Company, laid out the town of Bellevue.

He was married to Ni-co-mi, an Omaha Indian woman, and the Omaha Tribe gave him the title "White Chief." He moved to Plattsmouth in 1862, and died there in 1865. Sarpy County was named in his honor.

NEXT
Moses Merrill The Missionary Spirit