NEXT
The Fur Traders: Manuel Lisa 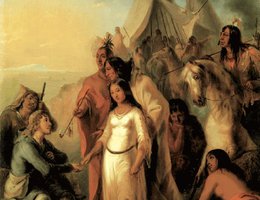 "The Trapper’s Bride" by Alfred J. Miller, circa 1837
Courtesy The Walters Art Museum

In the 250 years before the Louisiana Purchase in 1803, explorers from several European countries had tried to investigate and claim and govern the Great Plains — with little success. A few individual traders traveled in and out of the Plains during the 1600s. But it wasn’t until 1807 that trader Manuel Lisa built Fort Lisa on the west side of the Missouri River in what is now North Omaha. This was the first large-scale trading operation to be established in the new Louisiana Purchase territory.

The Spanish had come north from Mexico and Santa Fe in search of gold, but they found none and left. The French established St. Louis where the Mississippi and Missouri Rivers meet. They traveled west looking for trade with the native tribes. British explorers came east from Oregon while the Hudson Bay Company came south from Canada. The Americans were going west from the Atlantic Coast. 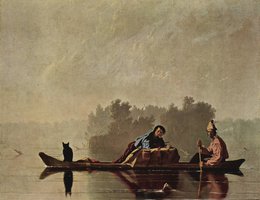 They were all seeking the new gold of the west — fur.

Europeans wanted beaver, raccoon, fox, mink, deer and even bear skins for the same reasons that Indians did — fur made warm clothing. The pelts were either sewn into coats or clothing or the hair was removed and then pressed, heated and chemically treated to make felt. The felt was then shaped into coats or hats. Beaver coats and hats were especially popular in Europe, and the European beavers had been hunted almost to extinction. Manuel Lisa’s trading company was one of the first to exploit this market.

In return for trapping wildlife, the Native tribes traded for European manufactured goods — guns, knives, hatchets, beads, wool blankets, and other clothing were popular. On the negative side, the traders also offered whiskey and unknowingly brought European diseases, both with disastrous results. In fact, the impact of European traders, and later trappers, was a mixed experience for the Native tribes. Iron hatchets were a definite improvement over stone axes. Guns were better than bows and arrows. But alcohol was a new experience that was particularly addictive. For the trader, the introduction of “Old World” diseases was totally unintended as Native Americans had little natural resistance to the plagues. Sometimes the disease wiped out nearly half of the native group, which meant a loss of new friends and less people in which to do business.

Stories about the exploits of these "Mountain Men" were circulating back east, and several religious groups decided this was too much vice and bad influences to be tolerated. So, missionaries were sent west, at least in part to counteract the influence of the fur traders. Their other major goal, of course, was to convert tribal people to Christianity.

NEXT
The Fur Traders: Manuel Lisa