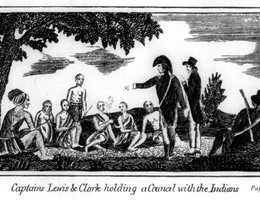 Captains Lewis and Clark holding a Council with the Indians; by Matthew Carey of Philadelphia, 1807
Courtesy Library of Congress, Rare Books and Special Collections, cph 3a19565

In the east, there was history of Indian wars. Because of this, some white Americans new to the Louisiana Purchase area thought they needed protection from Native Americans. There were only some minor conflicts, but people still worried.

So in 1820, Fort Atkinson became the westernmost U.S. military post. The fort provided the only government authority in the huge territory west of the Missouri. It was built on the same Missouri River bluff where Lewis and Clark held their Council with the Oto Indians. 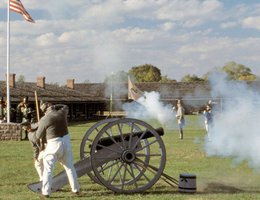 Fort Atkinson was built in the shape of a rectangle. The one-story barracks were made of logs with shingle roofs and brick chimneys. The barracks faced the inside of the rectangle. They had gun slits, or “loopholes,” on the outside walls. The fort had cannons in two opposite corners. There was a massive powder magazine (a building used to store guns and ammunition) in the center of the fort. Outside of the fort there was a large council house for meeting with the Indians, a gristmill, a schoolhouse, sawmill, and other buildings. A brick kiln produced thousands of bricks. At one point, over 1,000 soldiers guarded the post. Fort Atkinson was the earliest and largest town in what was to become the Nebraska Territory.

Take a self-guided audio tour of the fort with the Friends of Fort Atkinson.