The Pawnee and the Lakota Sioux 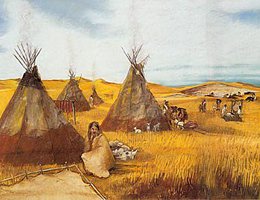 The Pawnee was one of the earliest Native American tribes to be described in the European historical record, and they were one of the largest groups to live and roam across the territory. Their name most likely comes from a Pawnee word for horn which was “Pariki” or “Parrico” and was in reference to the way they fashioned their hair to look to have a horn or horns. The French explorers recorded the term as “Pani” as eastern native groups described the powerful tribe to the west. The Pawnee were probably well established in what is now Nebraska during the time that Coronado explored as far north as central Kansas and they appear on the maps of Father Jacques Marquette in 1673. They built large, permanent earth lodge villages, but spent over half of each year roaming across central and western Nebraska hunting game and buffalo. Although the early Pawnee and several other tribes of the historic periods had permanent earth lodge villages, they also lived in tepees while on extended bison hunts.

The Pawnee all spoke a Caddo language, which is very different than the language of other Nebraska tribes.

They were divided into four individual bands — the Chaui or Grand Band, the Kitkehahki or Republican, the Pirahauerat or Tappage, and the Skidi or Wolf Pawnee. The Skidi were not closely bound to the other bands, and they might have sprung from a somewhat different ancestry.

From the earliest times, the tribe used tame or "domesticized" dogs to help them drag their possessions across the plains on the hunts. Around 1700 the Pawnee began to acquire horses by raiding tribes far to the southwest who in turn got the animals from the Spanish. As in many other tribes, horses changed the Pawnee’s way of life. 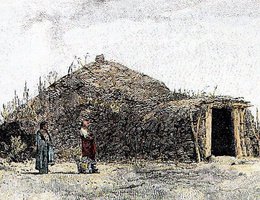 The earliest descriptions of the Pawnee indicate that their largest earth lodge villages may have grown to over 1,000 people. When Zebulon Pike came through Nebraska in 1806 and visited a Pawnee settlement along the Republican River, he recorded the population to be around 2,000 people. The earth lodges were circular with the floor dug slightly below the surrounding ground level. The lower outside walls were made of brush and there were four or more central posts holding up roof rafters. All of this framework was covered by earth. There was a central smoke hole in the roof with the fireplace located directly below it. A covered entrance usually extended to the east or southeast. On the west side, an altar was built on which a sacred bison skull usually rested. Beds were built from small timbers and lined the outer walls. The lodges were constructed by the women of the tribe.

This was a matriarchal society, women were responsible for planting, cultivating and harvesting the gardens that surrounded the villages. Each garden was about an acre in size. They used simple tools — a rake, a hoe made from the shoulder blade of a bison and a digger made from a fire-hardened stick. They saved and planted seeds for corn, beans, pumpkins, squash and melons. Both corn and beans were dried, put into skin bags and stored in underground storage pits to last through the winter. Some of these pits were in the earth lodge and others were outside. To prevent other tribes from finding the outdoor pits while the Pawnee were away on the hunt, they carefully covered them with sod. 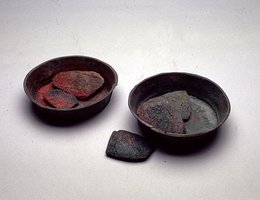 During the long hunt periods they killed elk, deer, bear, beaver, otter, raccoon, badger, squirrels and especially bison. One bison would provide enough meat to feed one person for a full year, but if the group were up to a thousand strong, it took a lot of bison to support them. Groups would travel up to 900 miles to find good hunting grounds. The meat was often eaten fresh after a kill. What could not be eaten right away was cut into strips and dried in the sun to preserve it.

The Pawnee were perhaps the most religious group on the plains. At the head of their deities stood Tirawa, the creator of the universe. Tirawa was a purely spiritual being and had other heavenly gods helping him and guarding the people. These heavenly gods were identified with stars. The most important were the Morning and Evening Stars, which represented the male and female principles in Pawnee religion. Other gods were the earth gods who were special guardians of individuals and secret societies. They were, for the most part, identified with animals.

The Pawnee were the most populous tribe to live in Nebraska, and they lived here longer than any other group. It was estimated that there were 10,000 to 12,000 Pawnee living in Nebraska by 1800 CE. Because of their numbers, the Pawnee had little to fear from their enemies, but in the early 1800s their fortunes began to change. Smallpox and other diseases, for which they had no immunity, reduced their number by half. Their villages on the Loup River were being raided by the 1830s by the nomadic and better-armed Lakota (Sioux). They were eventually forced to give up most of their lands in Nebraska and many eventually moved to a reservation in Oklahoma.

The Sioux Indians were a very large Native American group that was composed of several tribal groups who all spoke a language known as Siouan. The Sioux tribes who lived west of the Missouri River are known as the Lakota and sometimes referred to as the Teton Sioux. The Lakota are comprised of seven subgroups: Oglala, Brule, Sans Arc (No Bows) Hunkpapa, Miniconjous, Sihasapa (Blackfeet), Two Kettle. Of these, the Ogalala, and the Brule, were the main tribes to roam across what is now western Nebraska.
The Lakota gradually moved west from the tip of Lake Superior around 1700. By 1740, they had acquired horses and they became more and more nomadic, hunting game across the Central Plains. They often came into conflict with the Pawnee on these hunts. By 1780, it’s estimated that there were up to 10,000 Lakota living on the plains.

The Lakota had several methods for hunting bison. Sometimes, hunters on foot would disguise themselves with wolf skins and stalk the herds. During the winter, hunters with snowshoes would drive the bison into deep snow where they could be more easily killed. Sometimes, individuals on horseback would single out one animal from the herd and kill it with a lance or bow and arrow, and later with a rifle. But usually, the hunts were communal exercises. Groups of mounted horsemen could surround a herd and keep them bottled up as the hunters killed the animals. At other times, the tribe would stampede the buffalo into enclosures, blind canyons or over a cliff.

The various parts of the bison gave the tribe food, shelter, clothing and all kinds of tools and equipment. Before contact with Europeans, Native Americans used almost every part of the bison they killed. 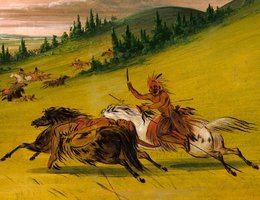 Lakota life was a man’s world in which the warrior sought personal fame through his achievements on the hunt or in warfare. For instance, there was great honor for a warrior to be the first to touch an enemy in battle — known as "counting coup." Coups were remembered and recounted by the warrior during dances and ceremonies. The successful warrior also got wealth by capturing horses from the enemy, and he could enhance his prestige by distributing horses to others in the group. Lakota values included honor, fortitude, generosity, wisdom and honesty.

While it was a man’s world, the women actually built and owned the tepees that the tribe lived in. The tepees were made of tanned buffalo skins supported on a framework of long poles. The women butchered the bison, dried the meat, prepared the meals, made clothes, gathered wood, water, roots and berries and cared for the children. The tribes enjoyed games, feasts, story-telling, singing and dancing. Most games involved some form of gambling — for instance, dice or the moccasin guessing game. Others were games of skill, like archery and hoop and pole.

Lakota religion was based on a belief in an all-pervasive, supernatural power that dwelt in the sky, earth and the four directions. Young men were often sent on a vision quest across the plains until exposure to the weather, fasting and self-torture produced dream visions. In these dreams they acquired a song, or various taboos, or medicinal objects that would protect or treat them. Each year, supernatural forces were invoked to protect the tribe in a Sun Dance and related ceremonies during the annual encampments.