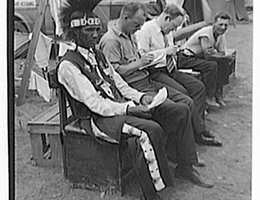 Indian bonus veteran, circa 1930. Veteran "Bonus Marchers" were demanding a promised, but as yet has not received, bonus payment for their service.
Courtesy Library of Congress, LC-H823-1475

During World War I, about 9,000 American Indians served in the armed services. They fought and died in defense of a nation that still denied most of them the right to participate in the political process. Congress, as a result, enacted legislation on November 6, 1919, granting citizenship to Indian veterans of World War I who were not yet citizens.

"BE IT ENACTED . . . that every American Indian who served in the Military or Naval Establishments of the United States during the war against the Imperial German Government, and who has received or who shall hereafter receive an honorable discharge, if not now a citizen and if he so desires, shall, on proof of such discharge and after proper identification before a court of competent jurisdiction, and without other examination except as prescribed by said court, be granted full citizenship with all the privileges pertaining thereto, without in any manner impairing or otherwise affecting the property rights, individuals or tribal, of any such Indian or his interest in tribal or other Indian property." 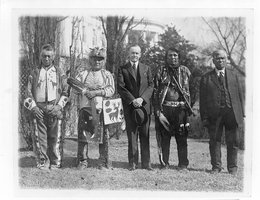 Until the Indian Citizenship Act of 1924, Indians occupied an unusual status under federal law. Some had acquired citizenship by marrying white men. Others received citizenship through military service, by receipt of allotments, or through special treaties or special statutes. But many were still not citizens, and they were barred from the ordinary processes of naturalization open to foreigners. Congress took what some saw as the final step on June 2, 1924 and granted citizenship to all Native Americans born in the United States.

Granting citizenship was not a response to some universal petition by American Indian groups. Rather, it was a move by the federal government to absorb Indians into the mainstream of American life. No doubt Indian participation in World War I accelerated granting citizenship to all Indians, but it seems more likely to have been the logical extension and culmination of the assimilation policy. After all, Native Americans had demonstrated their ability to assimilate into the general military society. There were no segregated Indian units as there were for African Americans. Some whites declared that the Indians had successfully passed the assimilation test during wartime, and thus they deserved the rewards of citizenship.

"The Indian, though a man without a country, the Indian who has suffered a thousand wrongs considered the white man’s burden and from mountains, plains and divides, the Indian threw himself into the struggle to help throttle the unthinkable tyranny of the Hun. The Indian helped to free Belgium, helped to free all the small nations, helped to give victory to the Stars and Stripes. The Indian went to France to help avenge the ravages of autocracy. Now, shall we not redeem ourselves by redeeming all the tribes?"

So, the Indian Citizenship Act of 1924 proclaimed:

"BE IT ENACTED by the Senate and house of Representatives of the United States of America in Congress assembled, That all non citizen Indians born within the territorial limits of the United States be, and they are hereby, declared to be citizens of the United States: Provided That the granting of such citizenship shall not in any manner impair or otherwise affect the right of any Indian to tribal or other property. (Approved June 2, 1924)"

Not all Native Americans viewed citizenship as something wonderful. Their experiences in dealing with Washington and the states did not give them much confidence in the government or desire to participate in it. Some tribes feared they would have to give up their own sovereignty and the federal government would deny its treaty obligations. In the words of one Native American:

On the other hand, there were Native Americans who saw voting as a right that had been denied to them too long. Maine was one of the last states to overturn state legal barriers to Indian voting. That rankled Henry Mitchell, an Indian canoe maker:

"The Indians aren’t allowed to have a voice in state affairs because they aren’t voters. All they [the politicians] have to do out there is to look out for the interests of the Indians. Just why the Indians shouldn’t vote is something I can’t understand. One of the Indians went over to Old Town once to see some official in the city hall about voting. I don’t know just what position that official had over there, but he said to the Indian, ‘We don’t want you people over here. You have your own elections over on the island, and if you want to vote, go over there.’ "

Did the 1924 Act really mean the end of the journey in the Native American’s march to equality or was it merely a rest stop? By the time the 1924 Citizenship Act was passed, two-thirds of all Indians had already gained citizenship. And while all Native Americans were now citizens, not all states were prepared to allow them to vote. Western states, in particular, engaged in all sorts of legal ruses to deny Indians the ballot. It was not until almost the middle of the 20th century that the last three states, Maine, Arizona and New Mexico, finally granted the right to vote to Indians in their states. And the policies of the federal government towards American Indians continued to change and evolve.