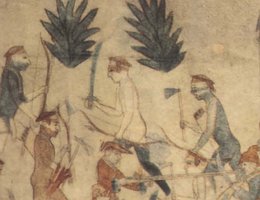 Another detail from the buffalo hide paintings depicting the Pawnee and Villasur battle shows the priest in the lower right
Courtesy Palace of the Governors Collections, New Mexico History Museum

There is a remarkable record of Villasur’s defeat in 1720 still in existence. An unknown artist recorded the battle scene on three large buffalo hides based on descriptions provided by the survivors of the defeat. The artist was expertly trained in the Spanish style of painting, but we don’t know if he or she was Spanish or Indian. Scenes were first drawn in pencil, then traced in ink, and later the intense watercolors were added on a yellow ground.

The original painting still exists. It has hung at the family estate of a Swiss nobleman, Baron Dr. Andre von Segesser, for over 200 years. It is the oldest known painting of a Nebraska scene.

A replica of the hide painting is on display at the Nebraska State Historical Society Museum. The replica is painted on six cowhides stitched together. When you view the reproduction of the painting, you are looking to the south at the forks of the Loup and the Platte. The Platte River is near the top of the painting. Two Indians are wading across the Loup River.

The Pawnee and Oto attackers can be identified by their vivid body paintings and skull caps with drooping tassels. Pawnee warriors were known, in later times, to strip themselves of clothing before a battle. In addition to their bows, arrows, and spears, many are shown armed with swords and hatchets received from French traders.

There are French attackers in the painting, and they are all wearing either three cornered hats or pointed caps. Their similar equipment and clothing styles suggest a military unit, but this may have been artistic license to help explain the Spanish defeat.

The Spanish had built a defensive perimeter of saddles and baggage before the battle, but it may not have been manned when the surprise attack took place. Frenchmen are shown firing from behind the Spanish defenses. 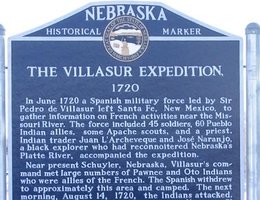 One figure is believed to be Jose Naranjo, a black man who served as chief scout for this and earlier expeditions. He died in the battle.

Pedro de Villasur can be identified by his red officer’s coat. He died of wounds received early in the battle.

Spanish soldiers wore broad brimmed leather hats, long leather coats, and some carried heavy leather shields. They are grouped together in a final defensive circle. The extremely long guns are an exaggeration by the artist, though French muskets were longer than those of the Spanish. The orange flame is the gunpowder’s "flash in the pan."

Father Juan Minguez, a Dominican priest, is shown giving last rites to his fallen comrades. He died in the battle, as well, but for several years rumors circulated that he was taken prisoner by the Oto and later escaped.