NEXT
Recording the Massacre

In August 1720, Villasur’s army arrived at the Platte River somewhere around Grand Island. The troops crossed the Platte and then the Loup River where Villasur started encountering Oto and Pawnee Indians. He attempted to negotiate with them at various times using a Spanish slave who was a Pawnee named Francisco Sistaca. Near present-day Schuyler, Nebraska, Sistaca disappeared. Villasur became very nervous about the belligerence and numbers of the local Indians, whose villages were south of the Platte, near present-day Bellwood and Linwood. So, his army turned around and returned to the Loup River. They crossed the river and set up a camp in a meadow covered with very tall grass, probably located just south of modern-day Columbus, Nebraska. 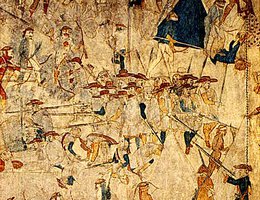 Villasur and his men (center) were quickly surroundedby the Pawnee and killed in this detail from the buffalo hide paintings
Courtesy Palace of the Governors Collections, New Mexico History Museum

At dawn on August 14, 1720, a huge force of Indian warriors, possibly accompanied by French traders, attacked the camp. Most of the Spanish were still asleep and the tall grass made it easy for the Pawnee to slip in close. There is speculation that Sistaca had informed his people (the Pawnee) of the best time to attack.

General Villasur was killed in the first attack. The soldiers around him who were still alive formed in a circle. There were other Spanish soldiers who were holding the horses nearby. They were also under attack, but they managed to saddle some of the horses and three of the men charged through the enemy forces towards the circle of troops. One of the three men who made the charge was successful in reaching the circle and seven soldiers escaped via horseback. One of these survivors had been shot nine times and had already been scalped. The Pueblo scouts with Villasur were in a separate camp and did not suffer the full brunt of the attack by the Pawnee and Oto. Still, 11 of them died in the fighting.

The battle lasted for only a few minutes and when it was over, 35 Spaniards were dead, including Villasur, the priest Minguez, Naranjo, one civilian, one lieutenant, one corporal, the quartermaster, and eight soldiers. Forty-nine Pueblo Indians and all of the Apache escaped. The battle was a massacre.

The survivors retreated to Santa Fe and reached home on September 6, 1720, 24 days after the battle. Some of the survivors blamed the French fur traders for their defeat.

This battle was the biggest defeat for Europeans in Nebraska to that time and the biggest victory for Native Americans. It was a major reversal for the Spanish. The governors in New Mexico investigated who was to blame for the defeat for the next seven years.

Meanwhile, the French in present-day Illinois learned of the defeat in October and sensationalized the victory by their Indian allies. The Native Americans brought Spanish swords, guns, clothing, and even part of Villasur’s diary from the battlefield.

No doubt the Spanish defeat had a major demoralizing effect upon the Spanish forces in New Mexico. The province had lost a general, its finest scout, a priest, and some of its best frontiersmen. Officials in New Mexico feared an invasion by the French. The defeat of Villasur’s elite army was followed by a series visits from Frenchmen in New Mexico territory who were seeking trade with the Indians and fueling the Spanish hysteria. However, the French had little success in establishing trade in the New Mexico and eventually gave up their effort. After that, they relied upon Indians to act as middlemen.

NEXT
Recording the Massacre