One Thousand Years Ago

"Which came first — the chicken or the egg?"

This is an age-old question that may not have a good answer. Neither may this question:

"Which came first — farming or a major increase in the Native American population during the Plains Woodland period?"

On the one hand, farming gave the native peoples a better way to feed themselves. On the other hand, more people were needed to maintain the new agricultural pursuits.

So, which came first? 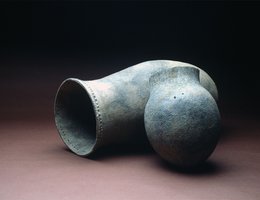 Early pots were thick with no shoulder or rim, but were a major technological advance
Courtesy Nebraska Game and Parks Commission,ARCH02 KB0022 01

Historians have debated for years whether Native Americans began to farm and then their population increase or if their population began to increase to the point that they were forced to develop new ways to feed the growing numbers. Perhaps the best answer is that the increases in farming and population were gradual processes.

What we know is that between 2,000 and 1,000 years ago (or 1 CE to 1000), the inhabitants of Nebraska gradually began hunting smaller animals, like bison, deer and antelope. They also began gathering plants to eat, like wild roots, berries, and eventually beans, squash, gourds and even corn. And toward the end of the period they began to grow these crops near their new semi-permanent dwellings.

What gives the period its name is the appearance in the archaeological record of pottery and new, smaller arrow points. Scientists believe that groups on the plains began trading with other tribes from the great woodlands to the east of Nebraska. The name "Plains Woodland" reflects the fact that plains tribes adapted the ideas from the east for use in a Plains environment. The most important adaptations were pottery and the bow and arrow. These were major technological advances for the time. 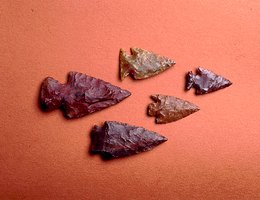 The bow and arrow weapon system was more powerful, more accurate, lighter and easier to carry than the old atlatl and lance system. So, Plains Woodland period hunters were more efficient and as a result could possibly stay closer to home to find their food.

Pottery was also a major technology because the pots were an efficient way to both store food and, eventually, cook it. Early pots from this period had thick walls, little ornamentation and did not have a shoulder or rim. Gradually, potters of this time learned how to make their pots thinner and developed the familiar jar shape that helps store food. During the next period, the Central Plains Village period, true ceramic pots were produced.

In part because of these new technologies, Plains Woodland people lived in the first documented semi-permanent dwellings. Archaeologists tell us that for the first time these dwellings appear to have been occupied year-around. Often near these small village sites, archaeologists find evidence of elaborate burials in earthen mounds.

By the end of the Plains Woodland period, there is evidence of that the groups had begun to grow gourds and maize (or corn). Experimentation with small scale gardening means that the first farmers on the Central Plains had been born.

When did inhabitants of Nebraska begin growing crops and start becoming successful farmers?

What crops did they grow?

How do you think life changed for prehistoric farmers when they started farming?