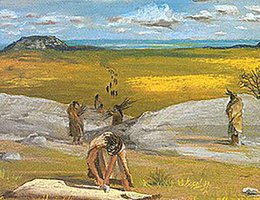 By 9,000 years ago, the last Ice Age had ended and the climatic patterns somewhat characteristic of the modern period were established. Many of the animals that had dominated the Plains during the Ice Age became extinct. Mammoths, camels, horses, and others all died out. People changed the way they lived in response to shifts in climate and available plants and animals. More diverse hunting was practiced, with both large and small game species killed. Wild plant resources were also exploited to a greater extent than during the Paleo-Indian tradition. 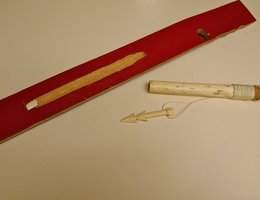 Atlatl - By Joseph from Cabin On The Road, USA (Today is World Atlatl Day)
[CC BY-SA 2.0], via Wikimedia Commons

During this time period, a new weapon technology for hunting big game, the atlatl, was perfected. This is a hand-held throwing stick that, in effect, acted as an extension of the throwing arm. The atlatl boosted the range and speed that spears could be thrown. Evidence indicates that throughout the long Archaic Period, people experimented with the size and shape of the atlatl, the way it attached to the spear, and the materials it was made out of. Some even added weights — all to make the weapon more powerful. 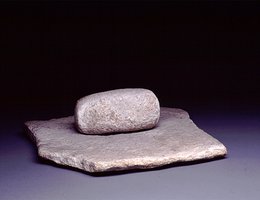 People during the Archaic Period continued to migrate in search of food. Permanent villages have not been found in the archaeological record, although people may have returned to the same location from year to year. New types of tools appeared. Archaic Period people produced a variety of spear point styles, possibly representing distinct, localized cultural groups. These cultural groups have been recognized largely based on the types of chipped stone spear points found at animal kill sites. It appears that while these tribal people did move from place to place, they were more localized than during the Paleo-Indian period.

Life in Nebraska in the Archaic Period changed dramatically with the end of the Ice Age. Grasslands, a warmer climate, and an assortment of smaller animals similar to those of today, replaced the cool, damp climate, the forest areas and the large animals of the Ice Age. Gone too were the Folsom people, replaced by various Archaic cultures that occupied the plains from 10,500 to 8,000 years ago.