2 Million to 10 Thousand Years Ago 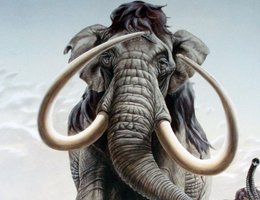 The Ice Age was a period of gigantism with mammoths dominating the landscape on the edge of the glaciers
Image by Mark Marcuson, courtesy University of Nebraska State Museum

After millions of years of moving from one place on the globe to another, after millions of years covered by a shallow inland sea, and after millions of years covered with tropical jungles and savannas, what would become the northern Great Plains was plowed under by a series of huge sheets of ice that pushed down from the North Pole and then receded. The glaciers were pushed across the northern plains by the weight of the snow that was accumulating far to the north. They advanced and retreated over much of North America beginning a little over two million years ago and ending just 18,000 years ago. While the glaciers had major impacts on northeastern Nebraska, they stopped just south of where the Missouri River is now. In fact, the last glacier determined the present course of the Missouri. If the glaciers had come even 10 or 20 miles further south, they would have plowed through the Ashfall fossil beds, probably destroying the paleontological record at the site.

On the edge of the ice, Nebraska was much colder than it had been earlier. The animals that dominated the landscape were huge. This was the period during which giant mammoths, camels, muskoxen, horses, bison, bears, and large cats. The mammoths were the most spectacular species on the edge of the glaciers. The came striding across the Bering land bridge about 1,800,000 years ago. The mammoths and a mouse (the meadow vole Microtus) were both supremely adapted to graze on the grasses and other vegetation that advanced and retreated with the glaciers.

Dr. Michael Voorhies explains the evolution of the horse.
From the 2000 NET Television program, Wild Horses (No larger resolution available). 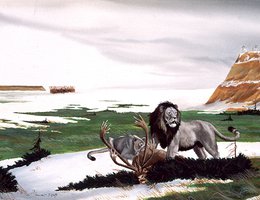 Horses also galloped across this snowy landscape, but not in the numbers they had earlier. The first horses had evolved around 55 million years ago, well before the Ice Age. A wide variety of horse species evolved and then died out as the grasses grew and receded. Around 10 million years ago, three-toed horse species were buried alongside of rhinos at Ashfall. During that same time period, horses migrated over the Bering land bridge into Central Asia. They spread across the globe, but in North America climate and habitat changes brought the ancient horses under pressure. The last remaining species in North America disappeared from the Central Plains around 10,000 years ago (8,000 years BCE). It was not until the Spaniards brought horses back to North America in CE 1500 (or 500 years ago) that the genus Equus set foot on this land.

The top of the food chain in this era included American lions, timber wolves, the massive-jawed species called dire wolf, and the massive, short-faced bear, Arctodus

This bear had a standing reach of at least 13 feet and was large enough and fast enough to bring down horses and giant camels.