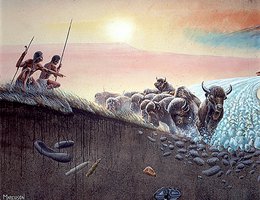 The first accepted evidence we have of human beings on the Central Plains is around 12,000 years old. Archaeologists have found spear points near Clovis, New Mexico, and elsewhere that date from that era.There is some evidence that human beings may have lived here even earlier, but that evidence is disputed. Most scientists believe the ancestors of today’s Native Americans walked across a "land bridge" from Asia to North America near the end of the great Ice Age. It is believed that what is now Russia and Alaska were connected by a strip of land that later sank beneath the northern Pacific Ocean. These early nomads on the Plains are now called Paleo-Indians. Scientists believe that Paleo-Indian culture was the dominate culture on the plains between 11,500 and 8,000 years ago.

The Paleo-Indians moved around a lot and hunted big game as their primary source of food. Some Paleo-Indian artifacts have been found near the bones of mammoth and large bison, the ancient form of buffalo. There is a lot to learn when archaeologists look at the bones and artifacts from the places where Paleo-Indians killed and butchered their prey. We know that they lived in small temporary camps and moved from place to place, probably following their prey. We know they hunted mammoths, camels, ground sloths, extinct forms of bison, and other animals. While they ate a lot of meat, Paleo-Indians also gathered plants to supplement their diets.

Sometimes they would drive mammoths over a cliff or into a muddy swamp area where the large animals would get "bogged down," making it hard for them to escape and easy for the Paleo-Indians to kill the mammoth. They used spears tipped with large, well-crafted rock points. These chipped stone points were typically large, leaf-shaped and stemmed. They are the most conspicuous and readily recognizable artifacts found for this period. There are a number of different styles of points that were produced, each with its own type name. The most famous and earliest being the Clovis and Folsom points. These points were named after Paleo-Indian cultures that lived in New Mexico but roamed up into Nebraska.

It’s hard to find evidence of the activities of these early Nebraska inhabitants because much of it is buried deep below the surface. Occasionally the remains of their kill sites and camps are uncovered by erosion or construction digs. Very little evidence of shelters has been found, and it is assumed that the tribes probably used simple skin tents or brush shelters. Few sites of this period have been excavated in Nebraska. It is clear from surface finds, however, that these people did range widely over the state.

Toward the end of the period, the weather in the region and the plants growing here shifted toward what we experience today — a plains grassland environment. Many of the large game species died and became extinct. The animal species that were left were largely that same species we find today. These changes altered the lives of the Paleo-Indians, and we can see those changes in the types of artifacts that are recovered. 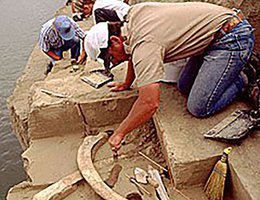 Did a Human Eat the La Sena Mammoth?

In 1987, archaeologists discovered a mammoth skeleton along the banks of Medicine Creek Reservoir in Frontier County. The site is known as the La Sena site. Radiocarbon dating techniques and the depth of the skeleton tell us the animal died 18,000 years ago. As they studied the skeleton, some scientists came to believe that early humans broke apart the mammoth to eat it and may have even killed it — some 6,000 years earlier than the Clovis and Folsom points are dated.

The fossil evidence they are looking at are bone flakes and the ways in which some bones were fractured. A new brand of scientific enquiry called taphonomy is providing the clues. Taphonomy is the multidisciplinary study of cultural and natural processes that may be responsible for the arrangement of objects found at an archaeological site. The La Sena skeleton had several bone flakes associated with it. These bone flakes were identical to the long, thin slivers of flint that have been documented as byproducts that flake off as humans chip stones to make sharp tools. So these early humans may have used stone tools to butcher the mammoth. In addition, some of the thick mammoth bones were split apart in ways that could only have happened with a heavy blow. They believe that the humans used large cobblestones to retrieve the nutritious bone marrow in the middle. Experiments with modern elephant bones splintered by rocks produced the same kinds of fractures, while studies of bones trampled by other elephants did not.

But not everyone accepts the evidence presented at the La Sena site. Skeptics say that the bone breaking evidence is not conclusive. And they are asked, "Why haven’t archaeologists found other evidence of human life at the La Sena site, like fire hearths, stone tools or stone debris?"

If the La Sena scientists are right, human beings were living and hunting here much earlier than we previously thought. From 12,000 years ago to 18,000 years ago is a significant difference. However, in the geologic time scale, humans are still a very recent introduction to the land that would become Nebraska.