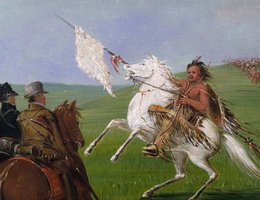 The Spanish offered many wonderful things that Native Americans found useful or beautiful — iron for tools, weapons, glass beads, mass-produced pottery — but the most prized possession of many Indians was the horse.

In ancient North America, horses had become extinct, probably around 10,000 years ago. Meanwhile across the sea, horses were becoming common in many ancient civilizations and were establishing their place in human history. Around 3,000 years ago, horses were tamed in Europe for the first time and used for transportation of both humans and cargo. Five hundred years later, Persian officials began using mounted messengers.

Soon after they arrived in America, the Spanish reintroduced horses to the continent. The Spanish horses were from the finest strains and were regarded as the top breed in Europe. Plains Indians prized them. Stallions and mares that escaped from the Spanish started the great herds of wild horses that spread north from Mexico into the United States and the western Plains country. These herds of wild horses still exist. 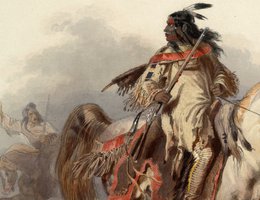 Horses and the Plains Indian
courtesy of Wikipedia

Life on the Plains before horses returned was very different. The introduction of horses into plains native tribes changed entire cultures. Some tribes abandoned a quiet, inactive life style to become horse nomads in less than a generation. Hunting became more important for most tribes as ranges were expanded. More frequent contact with distant tribes made competition and warfare more likely. Eventually, in most tribes a person’s wealth was measured in horses, and great honors came to those who could capture them from an enemy.
Before horses, dogs were the only pack animals on the plains. The harnesses and equipment originally designed for dogs were easily adapted to horses. Obviously, horses could carry much larger loads than a dog.

Horses reached Nebraska by the 1680s and the upper Missouri by the 1750s. Tribes in eastern Nebraska (Pawnee, Ponca, Omaha, and Oto) used horses for buffalo hunts, but continued to grow maize and live in earth lodge villages. In the western part of the state, the Sioux, Cheyenne, and Arapaho lived in skin tepees and roamed over most of western Nebraska as nomadic hunters. Horses allowed them to expand their traditional nomadic lifestyle across the plains.