NEXT
Farmers Call for a Strike!

Throughout the history of the central Great Plains region, there have been cycles and factors that affect the lives of those who live here. These factors have always produced results that we can see later. 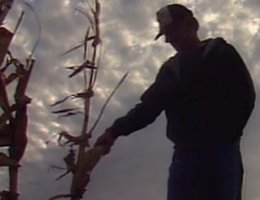 There were dark clouds hanging over agriculture during the 1970s and 80s
From the 1989 NET Television program, Centennial Summer

Throughout the 1970s and 80s, agriculture was in crisis.
From the 1990 NET Television program, After the Last Harvest

Some factors are natural — like the cycle of wet years and dry years. This "drought cycle" results in a pattern of good times followed by bad times for the plants, animals and humans living on the Plains.

Other factors affecting life on the Plains are man-made — like the cycles of economic activity and the progress of technology. In the 1970s and 80s, a combination of factors resulted in a period when farmers across the Midwest could no longer stay in business, and that had profound changes on the region.

This period is known as the farm crisis. There were several factors that came together to create the crisis.

Technology-New machines, crops, pesticides and irrigation meant that it took fewer farmers to produce the same amount of food in the 1970s. In 1940, one American farmer produced enough food to feed 15 people; by 1960 one farmer could feed 65 people.

Expansion through borrowing-To take advantage of the new technology, farmers felt pressured to buy more land and equipment. Many paid for this by borrowing money from banks. In the early 70s, they were able to grow more, and the prices for their crops were high enough to pay for the expansion.

A good economy-During the mid 1970s, the economy was good. Interest rates were fairly low, so farmers could borrow from banks cheaply. People in foreign countries wanted American food and had the money to pay for it, so they became important to the farmers. And prices for farm land seemed reasonable. 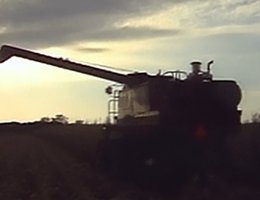 Harvesting in Nebraska in the 1980s
From the 1989 NET Television program, Centennial Summer

The economy went bad. The economy moves in cycles. In this time period, economic factors starting going down. This forced interest rates up so farmers had to pay more for the loans they needed to operate each year. Also, people tend to buy less during bad economic times, so the prices paid for farm products went down.

Foreign markets dried up, driving prices down further. President Jimmy Carter stopped the shipment of farm products to Russia in 1980 to punish Russia for invading Afghanistan. That hurt the farm export market. And then, other countries ran into hard economic times as well. U.S. farmers could not sell as many goods overseas as they had been. 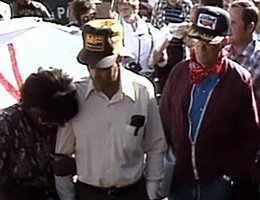 A farm family who lost their land attending a strike in the 1980s
From the 1990 NET Television program, After the Last Harvest

The 1980s was a period when thousands of farm families lost their farms because of low farm prices and crushing debt. Farming was in a crisis. Many of the farmers who were able to survive the 1980s had to find work off their farms to add to their small farm incomes. There were specific results.

Rural populations declined. Actually, the farm crisis of the 70s and 80s sped up a process that had been going on for some time. In 1935 the number of farms in the United States reached an all-time high of 6.8 million farms. By the mid-1980s, there were only 2.2 million farms.

In this section, we’ll tell the story of the farm crisis and the beginnings of possible new economic opportunities. The same technology that threatens farming on the Plains may offer new ways to make money and revitalize the area.

NEXT
Farmers Call for a Strike!