A Sense of Geologic Time 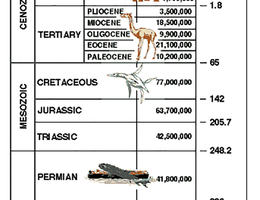 Scientist believe the earth was formed somewhere around 4.5 billion years ago. That’s a long time ago. Suppose you created one long piece of paper, stretched it out over 10 miles, and started recording what we now know about the earth. To begin with the easy tasks, you would record what we know from a study of recent historical records. Then, as you worked back in time, you would have to look to what archaeologists and paleontologists have found from the study of artifacts, fossils and bones. Then, moving even further back in time, you would have to turn to what geologists have found from the study of rock formations and fossils.

When you were done, the first 9 miles of this 10-mile long history would have only a few entries penciled in. The time period from the birth of the earth to 570 million years ago is known as the Precambrian Era. Precambrian rocks are the oldest on earth and they are usually found deep below the present surface. Scientists tell us that life evolved slowly from single-celled organisms, through green algae (the first plants able to make energy from light), and to the first animals. Animals evolved towards the end of the Precambrian, around 750 million years ago.

For most of these millions of years, the rocks and land forms that would become Nebraska were not even in the same place on the globe as they are today. Roughly 200 million years ago, the land that would become North America, South America, Africa and Europe was all grouped together in a mass called "Pangea." Then, slowly over millions of years, volcanoes and earthquakes split the forms into giant plates that slowly moved apart into their present positions.

Geologic Plate Movement Animation: the area that became present-day North America has moved across the globe over the last 600 million years.
Source US Geological Survey. Created by NET Learning Services 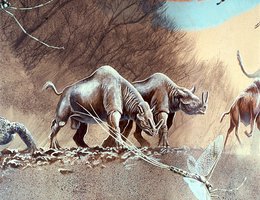 An illustration of a prehistoric ancestor of the rhino
Nebraska Game and Parks Commission, GP-PAL003_KB0002_02

Dinosaurs did not appear in the fossil record until 240 million years ago. On our 10-mile long history, dinosaurs would appear only 13 football fields from the end. The age of reptiles closed around 65 million years ago. The inland sea drained away and mammals evolved in the Cenozoic Era. 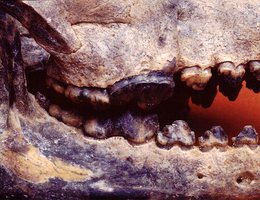 The largest of these early mammals on the Central Plains was the titanotheres more properly called “brontotheres”. These mammals stood up to eight feet tall and supported its 2.5 ton weight by eating vegetation. Predators included sabertooth cats and wolf-like dogs. 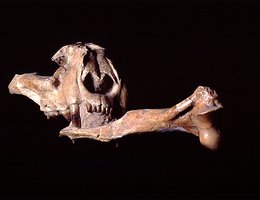 The fossil remains of two sabertooth cats, who probably died from fierce male-male combat. They were found still locked together after 25 million years by author and paleontologist Loren Eiseley.
Courtesy Nebraska Game and Parks Commission, GP-PAL02_KB0004_02

The sabertooth has caught the imagination of paleontologists and students. In one amazing fossil, we can see the evidence of the ferocity of these large cats. The two predators must have been fighting for dominance on their hunting grounds near Bayard, Nebraska, and they are still locked together after 25 million years. Nebraska author and paleontologist Loren Eiseley discovered this fossil in 1932, and it moved him to write the poem, Innocent Assassins. 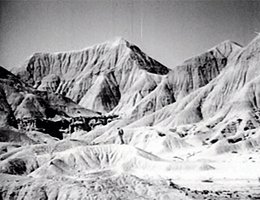 Nebraska Badlands
From the NET Television production, Reflections of a Bonehunter, 1994

Find out how Nebraska author and scientist Loren Eiseley fell in love with geology.
From the NET Television production, Reflections of a Bonehunter, 1994

Loren Eiseley is in the Nebraska Hall of Fame.
Learn more about him and the other members.

The actual date human beings arrived in North America is one of the great mysteries in archaeology today. Discoveries near Clovis, New Mexico, and elsewhere on the southern Plains in the 1920s and 1930s suggested that people migrated to the continent about 12,000 years ago. However recent finds from Alaska southward to Chile (including Nebraska) offer some evidence of human presence in the Western Hemisphere 20,000 or more years ago. The evidence, however, from those discoveries has not been widely accepted by archaeologists. 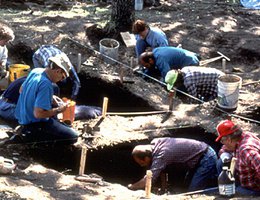 Glossary: Those Who Study the Past

Those who study the past share a lot — they have common interests and can often learn a lot from each other. But each of these disciplines look at different types of evidence as they draw their conclusions or form their theories about what happened and how people and animals lived in the past.

In this section of Nebraska Studies, we’ll explore what we know about the time before history was recorded.

Which two of the scientific occupations are the most alike? Why?

Which two of the scientific occupations are the most different? Why?

Which of the scientific occupations are the most interesting? Why?

Why should history be considered a science?

In what ways is history not a science?