PREVIOUS
Range Management as a Science 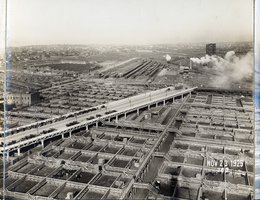 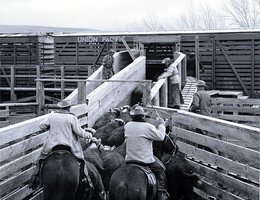 Technology and innovation dramatically changed beef in the first quarter of the 20th century. Improvements to railroad cars ended the days of shipping live cattle. Initially, railroads had been resistant to change because of their large investments in a system of corrals where they could feed and water cattle in transit to the Omaha or Wyoming stockyards.

But live cattle took up a lot of space in a rail car, lost weight in transit, and occasionally injured each other. Moreover, when you ship a live animal, you ship extra weight in hooves, bone, and horn that will not be consumed. Shipping just the carcasses made economic sense. The addition of refrigeration to railroad cars made that possible.

Find out more about refrigeration and its effects on the Omaha Stockyards.
From the 2008 NET Television program Beef State 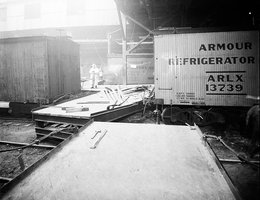 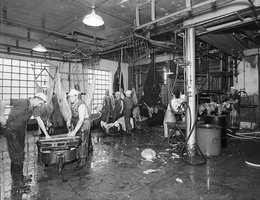 Meatpacking changed and grew as well. The 1906 publication of The Jungle, a novel by Upton Sinclair, aroused a public outcry against the packing industry, resulting in the decline of beef sales and exports.

In response, with support from the larger packing houses stung by market losses, the federal government passed the Meat Inspection Act of 1906 and the Pure Food and Drugs Act of 1906.These two pieces of legislation created a system for independent inspection of meat. From them came the Food and Drug Administration.

The four major packers, Armour, Cudahy, Morris, and Swift, continually expanded and improved their operations. In 1915, Armour built a new facility that was one of the largest in the region. That same year South Omaha merged with Omaha. 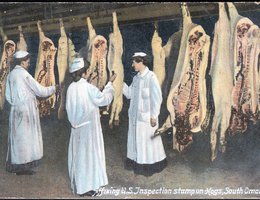