NEXT
The Oto & Missouria

The Omaha and Ponca Native American tribes are closely related. Both tribes speak a language called the Dhegiha division of the Siouan linguistic stock. They speak a similar language to that spoken by several tribes who lived further south during the historic period, the Osage, Kansa and Quapaw tribes. 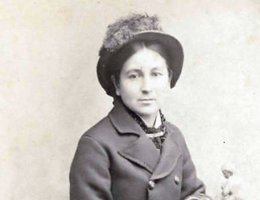 These are the Native American tribes mentioned in early Nebraskan historic records from roughly 1770 to 1850 CE.

These language facts and the historical stories told within the tribes suggest that all of these groups were part of one tribe that once lived near the mouth of the Ohio River. The name "Omaha" is generally interpreted to mean, "those going against the wind or current." This oral tradition has it that one group moved downstream from the Ohio and became known as the Quapaw. The second group moved up the Mississippi and up the Missouri Rivers. By the mid-1700s, they had settled along the Missouri in villages that stretched from the mouth of the Platte up to the Cheyenne River in what is now South Dakota. They became known as the Omaha tribe.

Ponca oral tradition says that they quarreled with the Omaha and broke away to form a new group living nearby along Niobrara River. The exact date of this split is uncertain, but they are recorded in early historical records as a separate tribe at least before 1800. Despite the split, the Omaha and the Ponca were closely related and shared many social customs.

It is probable that both the Ponca and Omaha learned how to build earth lodges from the Arikara, an agricultural nation living along the upper Missouri River between the Cannonball and Grand Rivers. The Omaha and Ponca built their lodges with walls about eight feet high and a central opening in the roof to allow smoke to escape and light to enter. These were utilitarian dwellings, and the Omaha performed few of the religious or ceremonial rituals that the Pawnee observed in building their lodges. The Omaha and Ponca raised corn, beans, and squash in gardens near their earth lodges. After the plants were seeded in the spring and after the harvest in the fall, they went on summer and winter buffalo hunts in western Nebraska. 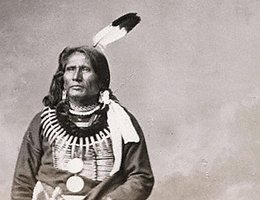 After Nebraska became a territory, the Omaha settled on a reservation in Thurston County. Many of the tribe felt the best way to survive was to adopt the outward appearances of the white peoples’ world. The famous La Flesche family shared this view.

The Ponca would face difficult times in the 1800s. They eventually lost most of their land in Nebraska and were forced to live on a reservation in Oklahoma. In 1875,

Ponca Chief Standing Bear was involved in one of the most important legal struggles over the rights of Indian people.

NEXT
The Oto & Missouria