NEXT
The Farmers' Alliance 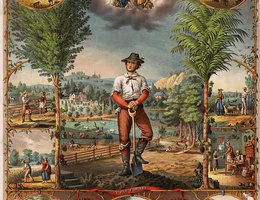 "Gift for the Grangers", detail from a Grange poster showing the ideal of a yeoman farmer, 1873
Courtesy Library of Congress, ppmsca 02956

The first of the politically active farmers’ groups was the Grange, or the "Patrons of Husbandry" as they were formally known. The Grange was organized in Nebraska in 1872 with 50 local chapters springing up during that year. Two years later they boasted 20,000 members. The group tended to be stalwart champions of the yeoman farmer. It was said that a Grange member could go to a statewide convention in the big city with a $10 bill in his pocket and the ten commandments in his heart, and he would leave the city without having broken either. Women played equal roles in the local chapters. The chapters tended to put on pageants to dramatize the plight of the farmer.

The Grange tried to reduce the cost of farming by organizing cooperative stores and businesses that could buy in bulk for their members. They even tried to manufacture low cost machinery in Plattsmouth and Fremont. But commercial companies would often sell machinery below cost to drive the Grange businesses out.

The businesses failed, but the Grange did have some political success. In 1876, Grange organizing was able to help push through a provision in the state’s constitution that allowed the government to regulate the railroads. The state now had the power to keep railroad freight rates down to what farmers considered a fair rate. However, it would take decades before the state would act on that power. The Grange declined in members in the early 1880s, although many local chapters still exist.

NEXT
The Farmers' Alliance