NEXT
The Oregon Trail

The Platte River has been described in folklore as "a mile wide and an inch deep." The writer Washington Irving said it was "the most magnificent and useless of rivers." Still, many tried to use the river to transport cargo even though it was shallow, had many channels, and it looked deeper than it really was. 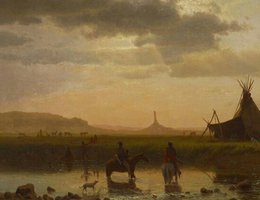 View of Chimney Rock, Oglala Sioux Village in Foreground by Albert Bierstadt, circa 1860. Chimney Rock is at the south edge of the North Platte River Valley.
Courtesy Colby College Museum of Art, Waterville, ME

In spite of the references to the river being worthless, the navigability of the Platte was continually discussed until railroads rendered much of the river traffic obsolete. There were attempts to use the river as a means of transporting cargoes, but the shallowness and the Platte’s many channels were to thwart and madden those who attempted to navigate her. The water shifting across its sand bed makes it channel shallow throughout most of the year and gives it the deceiving appearance of depth. This was emphasized by one of the earlier travelers on its course who wrote:

"...standing on its banks and seeing its waters whirling and boiling about ... supposed that a seventy-four [standard class of sailing line of battleship of 19th century] with her full complement of men and guns, could float upon her bosom; what then was my surprise to see a man jump in and wade a considerable distance without wetting his breeches flap." 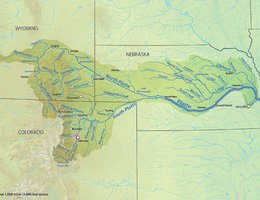 The earliest explorers described the Platte as almost impossible to navigate. One of the first recorded attempts to do so was made by Robert Stuart in 1812-13. He was returning from Astoria, Oregon. He and his men fashioned dugout canoes from cottonwood trees in eastern Wyoming and tried to float downstream. They eventually tired of dragging their craft through the shallows, abandoned them, and walked to the Elkhorn River where they constructed other canoes and proceeded down the Missouri to St. Louis.

In 1820 Jacques Laramie, a fur trapper, reported successfully floating bullboats filled with furs down a segment of the river on several occasions. He trapped his furs in the Rockies and carried them overland to Grand Island where he transferred them to boats.

Historian Francis Parkman wrote an account of meeting a downstream "flotilla" commanded by Pierre D. Pain the spring of 1846. He said Papin’s craft "hugged close to the shore to escape being borne down by the swift current" but noted that the river men were aground "fifty times a day." Invariably the navigator of the Platte spent 50 percent of his time upon sandbars.

Hiram M. Chittenden, a Corps of Engineers officer and historian of both the fur trade and navigation on the Missouri River, concluded that only one in ten Platte voyages in the twelve year span from 1835 to 1846 was successful.

"Low water, the vicissitudes of a braided river and possibly poor construction of the rivercraft account for these failures. The increasing presence of steamboats at Fort Pierre and Leavenworth also offered an attractive alternative to the difficult and finally abandoned downstream navigation on the Platte."

"Despite its uselessness as a stream, the Platte has won a permanent place in the history of the West. If boats could not navigate its channel, the ‘prairie schooner’ could sail along its valley where lay the most practical route across the plains."

NEXT
The Oregon Trail