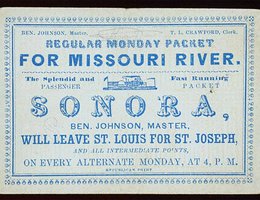 Steamboats from St. Louis provided most of the supplies for the West during the 1840s and ’50s.
From the 1980 NET Television program Hidden Places, Where History Lives: Two Routes West 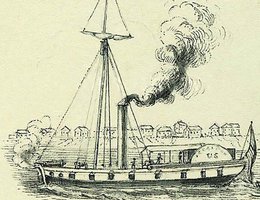 Engineer Cantonment and the "Western Engineer" steamboat, circa 1819 — the first to reach what would become Nebraska — by Titian R. Peale, artist with Long’s group
Courtesy U.S. Corps of Topographical Engineers

The first routes west were the rivers, and "the Mighty Missouri" was very popular. Travelers who were coming from St. Louis or points south used the Missouri River. Communities along the Missouri River like Bellevue and Nebraska City became starting points for pioneers moving westward to California or Oregon.

The Missouri River was created by geological glacial action thousands of years ago, and served as a route west for thousands of years. First used by prehistoric Indians, it served successively fur traders, explorers, and homesteaders. Among the earliest Europeans using the river were the French, who competed with the Spanish and British for ownership of the area.

After the Louisiana Purchase, the United State government set out to explore its new territory. The Lewis and Clark Expedition passed near present-day Rulo, Nebraska, in 1804 on its way to the headwaters of the Missouri (and eventually to the Pacific Ocean) and returned in 1806.

Bullboats, canoes, mackinaws, and keelboats were all used on the Missouri, which was full of hazards and snags. But as the need for more and more trade goods increased, the steamboat became more important. Major Stephen H. Long’s the Western Engineer was the first steamboat to reach what would become Nebraska, and it was able to do so only because it could float in only 19 inches of water. The river became the lifeline of Fort Atkinson. Mail and goods from St. Louis could arrive in 15 days. But, winter would close off the river, and the arrival of the first boat in the spring was always a reason for celebration. By mid-century boats reached 200 feet in length and thirty-five feet in width and could carry 500 tons of cargo.