NEXT
The Mormon Trail 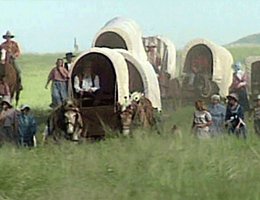 Re-creation of wagon trains on their way west on the Oregon Trail
NET Television’s The Platte River Road, 1991

There were many reasons for the westward movement to Oregon and California. Economic problems upset farmers and businessmen. Free land in Oregon and the possibility of finding gold in California lured them westward. At the same time, eastern churches wanted to teach American Indians of the Oregon Country their European ideas of "civilization." Many simply hoped for a chance to start a new life. But it was not until 1841 that the first group with serious plans to emigrate to the Oregon area left the banks of the Missouri River and headed west. In 1843 nearly 1,000 completed the trip with many more to follow.

Most of the pioneer families either followed the Oregon-California Trail or the Mormon Trail. Mormon pioneers began their trek to Utah in 1847 to escape religious persecution. Two years later gold was discovered in California, and thousands of "Forty-Niners" rushed across the continent.

It took nearly one month for a wagon train to cross Nebraska and four months to make the approximately 2,000-mile trip to either California or Oregon. Yet, nearly 400,000 people traveled the rutted trails from the Missouri River to the Willamette River. The Oregon Trail was never a clearly defined route. It changed with the effects of weather and use.

The Oregon Trail created one of the largest mass migrations in human history.
From the 1991 NET Television program, The Platte River Road 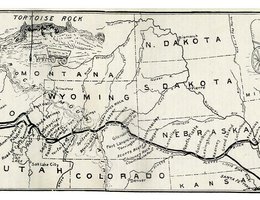 Pioneer families carried all of their possessions in wagons that were only about ten feet long and four feet wide. They were called "prairie schooners" because the canvas cover looked like a ship’s sail. Most wagons were pulled by oxen. They were dependable and inexpensive, costing about $50 each.

A typical wagon in the 1840s could carry a load weighing from 1,600 to 2,000 pounds. But it depended on the number and type of animals that pulled the wagon. Many of the emigrants overloaded their wagons with food and belongings. As a result, the trails became winding junkyards filled with items discarded by the pioneers. The litter included everything from cook stoves to furniture.

Wild game became scarce due to the thousands of pioneers who traveled the trails. So, food for the trip had to be carried in the wagons. A typical meal might be coffee, bacon and beans. A bread substitute, called fried cakes, was usually served. It was made of water and flour fried in bacon fat. Sometimes there was a dessert of dried fruit.

The pioneers traveled in groups called trains, but often individual families would strike out on their own. They could travel about 16 miles per day. There were rare attacks by Indians. Up until 1849, fewer than 50 emigrant deaths were blamed on Indian attacks. But as the numbers of travelers increased, so did the attacks. By 1860 emigrant deaths probably totaled close to 400. However, the emigrants killed even more Indians.

Illness and accidents were more serious threats than Indian attacks.
About 20,000 people died on the California Trail between 1841 and 1859 — an average of ten graves for every mile. Disease was the number one killer. A cholera epidemic swept through the trains in 1850, and hundreds died. Other diseases included scurvy, smallpox, and tick-borne fever. There were also an alarming number of accidents, including gunshot wounds, burns, and broken bones. A few people were even run over by wagons since nearly everyone walked beside the prairie schooners.

The famous Oregon, Mormon, and California trails all passed through the Platte River Valley. Many of Nebraska’s highways today, including Interstate 80, are on or near routes used over one hundred years ago by explorers, fur traders, covered wagon pioneers, and many others.

NEXT
The Mormon Trail