NEXT
Roots of Progressivism

The ends to which a rancher might go to acquire land were quite extensive. Some used a provision of the amended Homestead Act that allowed Civil War veterans or their widows and orphans to acquire land. These ranchers would locate war widows and have them file for the land, then get the land from the widow, who often never stepped foot on the property.

In one inventive, if reprehensible, scheme, land speculator John A. Walters of Lincoln took particular advantage of the Homestead benefit. After the Civil War, Pennsylvania Governor Andrew Curtin was moved by the suffering of the children in his war-ravaged state who were left without parents. In response, he created state-funded orphanages and schools for these children, hoping to better their lot in life. 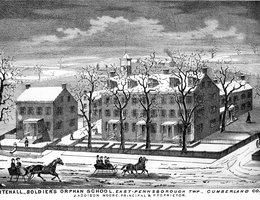 Find out more about how these schemers took advantage of widows & orphans.
From the 2008 NET Television production Beef State

In 1884, John Walters went to White Hall Soldier’s Orphans School in Carlisle, Pennsylvania, and acquired legal guardianship for 21 orphans, all under the age of 13. He then went to Custer County, Nebraska, where he took out homesteads for each of the 21 children. Then, early in the 1890s, all 21 children, represented by Walters, sold their land to Emmet Seybolt and then George A. Seybolt for two dollars an acre. The Seybolts subsequently sold the lands to C. H. Parmele, completing the Parmele Ranch.

Some deeds Walters signed, including a list of some of his "guardians".

It would only be later that laws would be passed to prevent the exploitation of children. At the end of the 19th century, what Mr. Walters did was quite legal.

NEXT
Roots of Progressivism