NEXT
The Dawes Act

What Does It Mean? 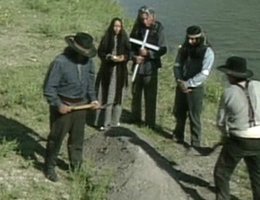 Judge Dundy’s decision in the case Standing Bear vs. Crook was an important development in the history of Indian-white relations. It established for the first time that Indians were something more than just "Uncle Sam’s stepchildren" to be regulated by the Interior Department as they pleased. Standing Bear and his followers were now free. But, the unanswered questions were: Free to do what? Free to go where?

They had no place to live, no food to eat, nor clothing to wear. No opinion by a federal judge could supply these things.

One of the undesirable results of the trial was that the United States government was permitted to arrest any Indians who, without permission from the government, were present on reservations not their own. Consequently, Standing Bear and his followers could be arrested if they set foot on any reservation without government permission. It appeared Standing Bear was only free to return to Indian Territory.

Big Snake, Standing Bear’s brother, was denied permission to leave Ponca lands in Indian Territory to visit the nearby Cheyenne, but he went anyway. He argued that his brother’s court case gave him the right to do so. The Ponca Indian Agent convinced the federal authorities to authorize the arrest of Big Snake when he returned. When the army personnel attempted to arrest him, Big Snake physically resisted and was shot and killed in the altercation. His failure to successfully defy federal authority based on Standing Bear’s court victory, greatly dampened the enthusiasm of other Indians to attempt it.

Fortunately, Judge Dundy decided in a separate case a year after the Standing Bear trial that the Ponca still held title to their Dakota lands. Congress finally agreed that a great wrong had been done to the Ponca in the Fort Laramie Treaty. In 1881, Congress appropriated money to compensate them for their losses. Five months later the Sioux gave up their claims to the Niobrara country. Eventually, in 1890, the Ponca were given individual land allotments either in Indian Territory or along the Niobrara. A majority of the Ponca chose to live in the Indian Territory where they were now receiving better treatment, and they had become reconciled to living there. However, Standing Bear and his followers chose to live on land that was located on their old reservation. The Ponca choosing to remain in the Indian Territory, became known as either the Southern or Hot-Country Ponca. Standing Bear and his followers were known by various names: the Northern, Cold-Country, and Nebraska Ponca.

Unfortunately for the Ponca, Judge Dundy did not address the issue of citizenship for Indians. It would not be until 1924 that Congress adopts the Citizenship Act, which confers citizenship on all Indians.

The Standing Bear vs. Crook court decision obviously only applied directly to a small band of Ponca. However, it was destined to be a catalyst for far reaching changes in federal Indian policy affecting thousands of Indians throughout the United States.

For more interactive resources and a 2012 NET Television documentary, visit

NEXT
The Dawes Act