Despite the surprising victory in the Nebraska legislature, anti-suffrage forces did not give up. They decided to use a weapon they had previously opposed — the initiative and referendum petition drive — to overturn the action of the legislature and governor. 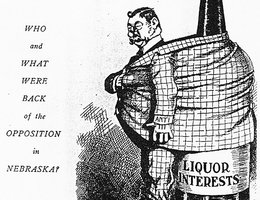 "Who and What were Back of the Opposition [to Suffrage] in Nebraska? Backbone! (Liquor Interests)"
Courtesy Nebraska State Historical Society, 5637

Progressives had added the initiative and referendum amendments to the Nebraska constitution in 1912. Just two years later, suffragists had used the initiative petition to place the woman suffrage amendment on the ballot for the general election. (The amendment lost by less than 10,000 votes.) Now, just three years later, the anti-suffragists used the other provision — the referendum — to try and overturn the new law. (The initiative process allows voters to propose changes to the constitution. The referendum allows voters to overturn the actions of the legislature.)

On July 21, 1917, the anti-suffrage leader, Mrs. L.B. Crofoot, presented petitions containing over 32,000 signatures to Secretary of State Charles W. Pool. The ease with which the signatures had been gathered aroused the suspicions of the Nebraska Woman Suffrage Association. They became even more suspicious when they read a newspaper report that circulators had been paid for signatures and that many signatures had been gathered in Omaha pool halls and saloons. They suspected that liquor interests had bought the petition drive.

One of the quirks of the new petition law was that the Nebraska Secretary of State was not required to verify that all the signatures on a petition were valid and from real people. But, citizens could challenge the petitions in court. That’s exactly what the suffragists decided to do.

They got permission from the Secretary of State to look at the petitions and began the time consuming process of checking each signature. They decided to concentrate on signatures from Omaha because 18,000 out of more than 30,000 signatures were collected there. The workers found that many of the addresses on petitions were fake. Some addresses for "voters" were in the middle of cornfields, the Missouri River or the railroad yards. The suffragists found several instances dead men had signed the petition — men who had died months before the petitions were circulated showed up on them. In other cases, men who signed the petition thought it was a petition to "bring back beer." 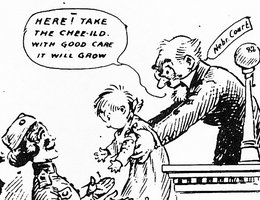 The suffragists filed suit in Lancaster County District Court requesting that Judge Leonard A. Flansburg issue an injunction to prevent placing the referendum on the next general election ballot. As the hearings before Judge Flansburg proceeded, it became clear that a final ruling might not be made before the November, 1918, election. So, the plaintiffs requested a temporary restraining order be issued. Judge Flansburg issued the order on July 6, 1918.

The hearings dragged on into the fall of 1918, and despite legal maneuvers including an appeal to the Nebraska Supreme Court, the referendum stayed off the November, 1918, ballot.

Finally, on January 24, 1919, Judge Flansburg issued a permanent injunction to prevent the secretary of state from submitting the limited suffrage law to a vote of the people. He ruled there was widespread fraud, forgery, and false certification of over 4,000 signatures. The Nebraska attorney general ruled that women were eligible to vote in upcoming municipal elections under the provisions of the 1917 limited suffrage law. On April 28 the anti-suffrage forces appealed Judge Flansburg’s ruling to the Nebraska Supreme Court. 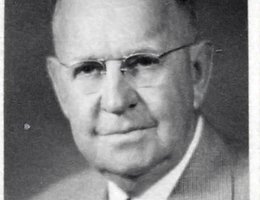 On June 28, 1919, the Nebraska Supreme Court settled the matter in a case called Barkley vs. Pool. They upheld Judge Flansburg’s ruling and agreed that any citizen, including non-voting women, could challenge fraudulent referendum petitions.

In a way, the Barkley vs. Pool decision of 1919 approving limited elections came too late. Nebraska’s limited law was overtaken by the federal amendment allowing women to vote in all elections. But the scandal over the anti-suffrage petition drive helped pave the way for the Nebraska Legislature’s unanimous ratification of the federal suffrage amendment. The court case also had a significant effect on the state’s initiative and referendum laws that still affect us today. The rules would undergo several changes in an attempt to make them more democratic.