NEXT
Native Americans Meet the Challenges 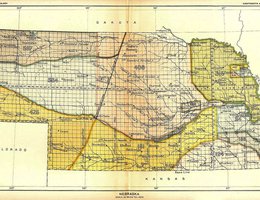 Select a tribe and year to read the text of each treaty or a law summary that ceded land to the U.S.

NET Learning Services
Based on an original Map of Native American land cessions via treaties in what became Nebraska
Courtesy Bureau of American Ethnologies, Smithsonian Libraries, 1899

Native American tribes, including the Omaha, Oto, Missouri, Pawnee, Arapaho and Cheyenne, all ceded (gave up) land in Nebraska to the U.S. government. In all, there were 18 separate treaties between 1825 and 1892 in Nebraska alone. These treaties were a part of a much larger pattern of land transfers that allowed an explosion of European settlement.

By 1850, the tribes had seen more people moving through along the Platte River. The Homestead Act, which gave free land to settlers, meant that large numbers of immigrants were now going to stay in the area. What were the relationships among the different tribes and the settlers? Did all the various tribes live together peacefully during this time? Were they free to move about? How did they become confined to reservations?

How did Native Americans view the arrival of white Europeans?

What crops did early Native Americans plant that are similar to those grown by the settlers who moved in later?

What crops are grown today in Nebraska?

Why do farmers in Nebraska raise those crops?

What are some differences in the way Pawnees farmed compared to farmers in Nebraska today?

Were Native Americans in Nebraska subsistence farmers or commercial farmers?

NEXT
Native Americans Meet the Challenges