Conflicts Among the Tribes & Settlers

There were many Native American tribes living on the Great Plains, competing for scarce resources. Of course, the various tribes came into conflict with each other. 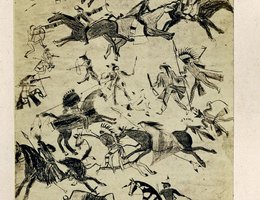 The Lakota (or Sioux) is actually a broad group of people that includes the seven bands of the Western (or Teton) Lakota, the Dakota (Yankton and Yanktoni) and the Nakota (Santee). This group of tribes lived in the Plains for only a part of their known history. The Lakotas originally lived in the northern woodlands. They struggled with the Anishnabe (who were called Chippewa by the Lakota). The Anishnabe were armed with guns they had from trading with trappers.

The Lakota slowly migrated south and westward and pushed aside the Omaha tribe in this early migration. At first, they didn’t have horses, but horses were spreading throughout the Plains from Spanish settlements in the Southwest. By 1742 the Tetons had gotten horses and they became more and more like horse-riding nomads. In the Central Plains the Lakota came into conflict with the Pawnee, a village tribe that held the rich hunting lands of the Republican River Valley until the Lakota entered the region. The Pawnee war parties usually made their trips on foot, unlike other tribes. Because the Lakota were mounted on horses, they had an advantage. 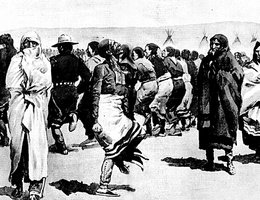 The Ghost dance by the Oglala Lakota at Pine Ridge Agency
Drawn by Frederic Remington from sketches taken on the spot.

The Omaha war parties varied from eight to a hundred warriors. All members of the party were volunteers. The leader was usually a well-known warrior who had demonstrated his skill in battle. The warriors are said to have worn a white covering of soft, dressed skin for their heads. No shirt was worn, but a robe was belted around the waist and tied over the breast. No feathers or ornaments could be worn at this time. In actual battle, the warriors wore only moccasins and breechcloth.

Sometimes the wives of a few of the men accompanied a large war party to help care for their clothing and to do the cooking. A sacred War Pack, kept in the Tent of War, was important in any war activities. The contents of the pack were believed to protect the tribe from harm. A returning war party with the scalp of an enemy held a special scalp or victory dance. Men who won special honors on the warpath were permitted to wear an eagle feather in their scalp locks. Certain warriors might also wear a deer-tail headdress. Only important men wore the large feathered headdress seen in movies and only on social occasions. Only the men wore feathers in their hair, but the women might wear them on their clothing. 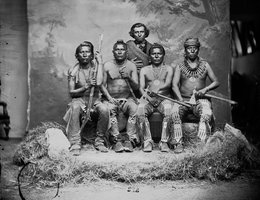 In the years after the Homestead Act, Europeans moved in ever greater numbers into Native American territory. In the 1860s and ’70s, the United States Army was engaged in war with the Sioux, Cheyenne, and Arapaho tribes. The Pawnee tribe had fought these other tribes for years, and so the Army turned to the Pawnee for help against a common foe.

The Lakota (Sioux) had much more trouble with early emigrants than other tribes. Their experience determined the history of homesteading. Trouble with whites began with the California gold rush. In 1850 approximately 50,000 gold seekers traveled the Overland Trail through the heart of Lakota country. The Lakota did not like these newcomers crossing their land, competing for resources. The government tried to get involved by peaceful means. 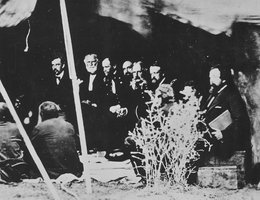 In 1851 government officials met with Cheyenne, Crow, Blackfeet, Arapaho, Assiniboine, Dakota, Lakota and Nakota tribal members at Fort Laramie, in Wyoming, just west of what would become Nebraska. Approximately 10,000 Native Americans camped and talked with U.S. representatives. The tribes and the government negotiated a treaty that had several main points:

The Fort Laramie Treaty paved the way for the U.S. to allow tribes the right to govern themselves. It also began several decades of treaty negotiations and agreements that eventually transferred almost all of the tribal lands to the U.S.

Unfortunately the peace did not last. In 1854 — eight years before the Homestead Act — some Lakota near Fort Laramie butchered an emigrant’s cow they thought was abandoned. Lt. John Grattan and 29 soldiers were sent to investigate. Grattan opened fire on the Indian camp. The Indians fought back, killing all of the soldiers. 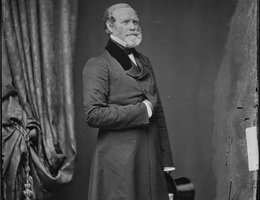 The next year Gen. William Harney was ordered to restore peace on the trail. He found a Lakota camp at Blue Water Creek in Garden County and attacked it, although the camp residents had nothing to do with the Grattan slaughter. Harney’s troops killed 136 men, women, and children. Although peace was restored, pressure continued to build, and war broke out again in 1863 with attacks on Overland Trail travelers. In 1867 the Lakota pushed eastward and attacked a Union Pacific railroad train in Dawson County, Nebraska. Attempts at peaceful settlements resulted in payments of food, guns, and other goods to the Lakota.

In the years after the Homestead Act of 1862, more Europeans moved into Native American territory. The Homestead Act gave free land to settlers who lived on the land for five years. In the 1860s and ’70s, the United States Army was at war with the Sioux, Cheyenne, and Arapaho tribes. The Pawnee tribe had fought these other tribes for years, and so the Army turned to the Pawnee for help against a common enemy.

The Pawnee became scouts. They were very successful in helping protect the railroad as it was being built across Nebraska, and they accompanied several U.S. Amy expeditions against the warring Sioux, Cheyenne, and Arapaho. But, by the late 1870s, the Pawnee Scouts were disbanded. The U.S. Government had removed most members of the Pawnee tribe from Nebraska to Indian Territory south of Nebraska.

There were more conflicts during the early homestead period with a band of Cheyenne in the Republican River valley of south central Nebraska. Again, a military expedition was sent out in 1869 to subdue the Cheyenne. The campaign killed 50 warriors.

For the immigrants, the threat they felt from Native Americans was probably greater than the actual history. There was conflict — theft, fights and murder on both sides. But there were also hundreds of treaty negotiations across the continent. These treaties lessened the conflict and, more importantly, transferred legal title for land that native tribal people had lived and hunted on for centuries to the U.S.