NEXT
The Civil War Connection

Who Were the Settlers? Who was Daniel Freeman? 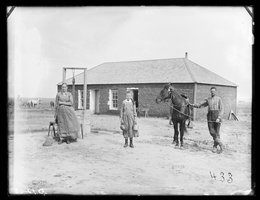 The homesteaders came from all over the globe, from all walks of life. They were newly arrived immigrants. They were American farmers without land of their own in the east. They were families with young kids. They were single women. They were former slaves, freed during and after the Civil War.

What united this diverse group of people was the desire to own their own land. Together they were responsible for one of the most significant and enduring movements — both physically and culturally — of the expansion period of United States history. By granting 160 acres of free land to claimants, the Act allowed nearly any man or woman a chance to live the American dream.

The sheer number of people and land involved enlarged the scope and impact of the Act. Eventually, 270 million acres — 10% of the land in the United States — was claimed and settled under this Act. Nebraska had already become the main road to the west. So, it’s no accident that one of the very first claims for land under the Act was in southeastern Nebraska, near the present town of Beatrice. Daniel Freeman was the name of the man who claimed the land, and his story is here. 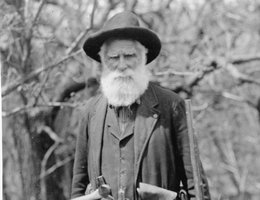 Daniel Freeman may have been the first homesteader to file a claim under the new law. For many years, that was what he claimed.

Here’s what we know. Freeman was a soldier in the Union Army on secret duty at Fort Leavenworth in Kansas. He may have been a spy. We know that for some time he had had his eye on a piece of land near a stream, Cub Creek, in southeastern Nebraska near Beatrice. Water was important to a homesteader. Freeman knew that the Act was going to go into effect on January 1, 1863. According to the stories his family passed down, Freeman had to be back in Fort Leavenworth on January 2nd. So, the story has it, he persuaded the registrar of the land office in Brownville to open up shortly after midnight on Jan. 1, making Freeman the first homesteader in the entire nation.

At the end of his military service in 1865, Freeman returned to Nebraska and built a log cabin on his homestead. He "proved up" his claim, and later acquired a considerable amount of land around the original homestead. He was a highly respected member of his community. He lived on his homestead until his death in 1908. In the 1930s, the National Parks Service bought Freeman’s homestead and preserved it as a national monument.

Who was Daniel Freeman?

How did Freeman decide where to locate his homestead?

NEXT
The Civil War Connection