NEXT
Living in an Atomic Age

After World War II, the Soviet Union propped up Communist governments in eastern Europe. The Iron Curtain had descended, and the U.S. responded with a policy of deterring further expansion.
An excerpt from Cold Warriors Never Die.
Courtesy 1990 NET Foundation for Television

In 1950, the U.S. government adopted a new cornerstone of its foreign policy based on the finding that the Soviet Union was likely to launch a surprise attack on us "once it has sufficient atomic capacity." That assessment was included in a National Secutiry Council document known as NSC-68. Defense spending was increased by 350 percent. But, the roots of the cold war actually go back to World War II and its aftermath.

When World War II ended, the "hot war" of bombs and bullets became a "cold war" of speeches and threats. After the war, there were only two super powers, the United States and the Soviet Union, with completely different political systems. These countries had been on the same side during the hot war. But in the cold war, they were enemies.

What made this war of words more tense than ever before was the fact that both countries had enough atomic bombs to destroy much of the world. Many of the key military bases of the cold war were located in Nebraska and the Central Plains. So, those who lived here during the 1950s and 60s were very aware that there were nuclear bombs pointed at them all the time.

So, what happened far away in Europe and the world had a big impact and interest for those living in Nebraska and the Plains. 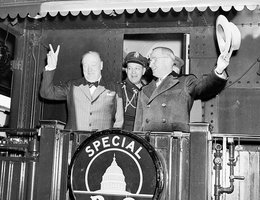 The initial focus of the Cold War was in Eastern Europe where the Soviet Union was setting up communist governments to provide a buffer against the West. Former Prime Minister Winston Churchill of Great Britain was speaking in Fulton, Missouri, in 1946, when he said:

"It is my duty to place before you certain facts about the present position in Europe. From Stettin in the Baltic to Trieste in the Adriatic, an iron curtain has descended across the Continent. Behind that line lie all the capitals of the ancient states of Central and Eastern Europe ... and the populations around them lie in what I must call the Soviet sphere, and all are subject, in one form or another, not only to Soviet influence but to a very high and in some cases increasing measure of control from Moscow."

Churchill’s speech got a positive response from the American people. Churchill’s image of an Iron Curtain became a powerful political symbol of the Cold War.

In response to the Soviet Union’s policies, the United States government developed the policy of "containment." The U.S. goal was to contain communism and not allow that political system to be adopted in other parts of the world. The United States negotiated a series of alliances with non-communist nations. In those alliances, the U.S. promised to protect those nations . . . with force and atomic weapons if necessary. And that fact made many in the world, and in Nebraska, nervous.

This section will explore the impact of the atomic bomb on life in Nebraska, the fear of communism, the build up of military bases in Nebraska, and the attempts to defend the civilian population in the Plains.

NEXT
Living in an Atomic Age