Living in an Atomic Age 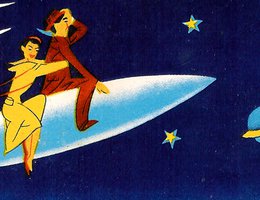 As World War II ended, a new age began — the Atomic Age. The first atomic bomb dropped on Hiroshima on August 6, 1945, ended World War II and created a new, more nervous age. Very quickly, the Soviet Union also developed atomic bombs. Countries that had been allies against the Nazis were now enemies, each pledged to outdo the other in the battle for political influence around the world. Then both sides developed hydrogen bombs — much more powerful than the original atomic bomb designs. In the era that followed, both world superpowers threatened to use weapons of tremendous destruction as they competed with one another to achieve supremacy of their own political and economic systems. This was a time of tremendous change in the social and political landscape, and Nebraska played a unique role.

Duck and Cover was produced in 1951 for use in elementary schools. Kids were taught how to "duck and cover" — diving below their desks or against a wall if a bright flash of light appeared.
U.S. Civil Defense 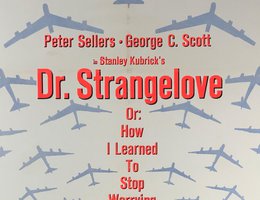 The Atomic Era, like many time periods, was both serious and silly. This was a time when young people were so concerned about dying in a nuclear war that they seriously researched bomb shelters. Many families built the shelters. State, local and national officials tried to figure out how the governments and their citizens could survive the awful destruction a nuclear exchange would bring.

There were many who did not believe that any of these civil defense measureswould work in a real nuclear war. 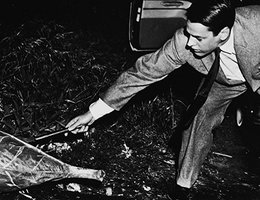 Books, movies and popular culture in the 1950s and 1960s were filled with Atomic Age themes. Some movies were serious films about political issues and nuclear war:

Other movies exploited the fear the audience felt about the Atomic Age, but with much less serious results: 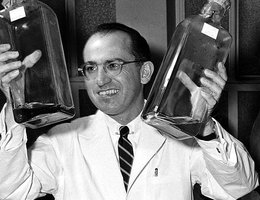 Dr. Jonas Salk, inventor of the polio vaccine, in his Univ. of Pittsburgh lab, 1957
Courtesy University of Pittsburgh Digital Archives

Other critics have suggested that the 1956 movie Invasion of the Body Snatchers was an allegory of communist subversion. The bodies of people who have fallen asleep are taken over by aliens who promise a collective lifestyle free from the individual pains of love, relationships, and ambition. The allegorical message is that we must be ever vigilant. Anyone — a teacher, politician, friend, or minister — could be part of the communist conspiracy.

But life went on. The Atomic Age was also a time of great social change and scientific advances. Things that you are familiar with — like television, Rock ’n Roll, drive-in restaurants (fast foods), hula-hoops, and drive-in theaters — had their start in the Atomic Age.

The Atomic Age brought many advances in medicine that helped people live longer lives. One of the greatest victories over childhood diseases was the development of the poliomyelitis (or "polio") vaccine. Polio was a crippling young people’s disease that spread throughout the United States in the 1950s. It caused great fear since every community was affected. Swimming pools closed and people avoided public gatherings, fearing they would catch polio.

At first, the polio vaccine was given as an injection or shot. Then, in 1954, Lancaster County was choosen as a test site for the new Salk vaccine, a sweet-tasting syrup. Vaccination stations were set up in libraries, schools and other public buildings. Children from Lincoln and the surrounding towns gathered at specific times to take their medicine. It worked. By 1955, the Nebraska Department of Health formed a new polio division to help distribute the vaccine statewide.