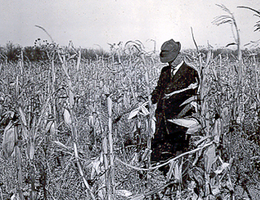 In the 1930s, the United States was suffering through the Great Depression. In Nebraska and surrounding states, the effects of the economic depression were made worse by sustained drought. Farmers were being driven from their land by crop failures that were common in the “Dust Bowl” that spread across the Great Plains.

Nebraska had a history of drought. Most of Nebraska was once called the “Great American Desert”. Its scorching summers, harsh winters, and lack of available water made this part of the Great Plains unfit in the eyes of some for settlement, not to mention agriculture.

While the first attempts at irrigation in Nebraska dated to the 1850s, these, and other irrigation methods that followed over the next few decades, were mostly confined to areas immediately adjacent to rivers and natural streams. Early irrigation methods and equipment were not very efficient, although they were an improvement over the alternative of waiting for rain. Early irrigation canals lacked storage reservoirs, and streams from which farmers took their water often dried up during the heat of summer just when water was most needed. 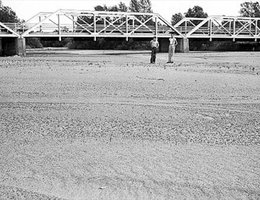 View of the dry bed of the Platte River south of Grand Island under a bridge on Highway 281, July 25, 1936
Courtesy Central Nebraska Public Power and Irrigation District

The Nebraska Legislature created the Central Nebraska Public Power and Irrigation District (CNPPID) on July 1, 1933. The Central District, commonly known as the “Tri-County Project,” intended to build an irrigation project that would bring water to south-central Nebraska. Three years later, after obtaining approval from the federal government and the necessary funds, the Central District began to construct Kingsley Dam and Lake McConaughy to store water for the huge project.