POWs Far from the Battleground 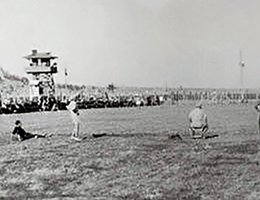 Over three million prisoners of war were captured by Allied forces during World War II. Of these, 370,000 Germans and 50,000 Italians were transferred from the battlefront to the United States at the request of our European allies, who were holding all the prisoners they could. Prisoner-of-war troops were typically referred to as P.W. or POWs.

Prisoners were brought to the U.S. to be safely confined and to supplement a depleted civilian work force. The POWs lived at 126 large camps, each housing several thousand men, some built in conjunction with military installations.

In Nebraska, approximately 12,000 prisoners of war were held in camps across the state. Scottsbluff, Fort Robinson, and the village Atlanta (outside Holdrege) were the main base camps. There were many smaller satellite camps at Alma, Bayard, Bertrand, Bridgeport, Elwood, Fort Crook, Franklin, Grand Island, Hastings, Hebron, Indianola, Kearney, Lexington, Lyman, Mitchell, Morrill, Ogallala, Palisade, Sidney, and Weeping Water. Altogether there were 23 large and small camps scattered across the state. 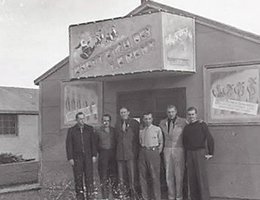 The playhouse on the POW camp at Fort Robinson, Nebraska; circa 1940s
Courtesy History Nebraska, RG2608-1265

In November, 1942, planning began to build a 1,000-man camp at Fort Robinson in the northwest corner of Nebraska. The fort was selected because prisoners could help maintain the post and its thousands of remount horses and mules. Shortly after the camp’s initial construction was completed, two more compounds were added to hold an additional 2,000 men. By war’s end the camp consisted of 160 temporary "Theater of Operations" buildings, with a capacity of 3,000 inmates, and several hundred military guards, interpreters, and other camp personnel.

On November 19, 1943, the first group of 600 German POWs arrived. They were veterans of Field Marshal Rommel’s elite Afrika Korps. By later accounts, the treatment of the prisoners in Nebraska was very good. Prisoners ate well. They did their own cooking with supplies from the Army. Most had tasks around the camp and they were paid a nominal sum for their work. Free time was spent in classes that were organized, in sports like soccer and even in theatrical productions. There was a base theatre at Fort Robinson. And even though soccer was an unfamiliar sport, Americans from the community turned out to cheer the games.

Camp population remained at 500 to 600 until after the allied invasion of Normandy in June, 1944. Then, a second surge of arrivals brought the camp to its maximum population in December 1944, all from the German army. In early 1945, the camp was designated a naval camp, and German sailors replaced most of the army prisoners. That fall the camp became a satellite of the Scottsbluff, Nebraska, prisoner of war camp.

Although the war with Germany ended in May 1945, the last few POWs and American camp personnel did not leave Fort Robinson until May, 1946. The buildings were soon sold as surplus and removed. Today, the Fort Robinson camp remains one of the country’s best preserved prisoner of war camp sites.