NEXT
The Red Menace

Sputnik 1 was a metal sphere the size of large beach ball with four antennas that broadcast a simple pattern of signals. This "exploded" view allows us to see inside.
Courtesy National Aeronautics and Space Administration

In October, 1957, the Soviet Union launched the first satellite — named Sputnik — to be hurled into orbit around the Earth. Sputnik was actually no larger than a beach ball and sent meaningless signals back to earth, but it had a profound effect on the thinking of citizens and governments around the globe. It was a shiny steel sphere about 23 inches across with four antennas trailing behind it. Russian engineers wanted to make sure that people around the globe could both see and hear it. Sputnik was polished so it would reflect light that could be seen with the naked eye even from 175 miles up in the sky. And it broadcast a "beep-beep" pattern of signals that could be picked up by amateur radio operators around the world. You can hear that pattern by clicking the play button at right.

The reaction in the U.S. and around the world was astonishment and some measure of fear. All of a sudden, there was an "enemy satellite" streaking across the sky over the U.S. At the time, no one knew what it was capable of doing. What U.S. political leaders did know was that if the Soviet Union had rockets powerful enough to launch a satellite, they had rockets powerful enough to launch atomic bombs on the U.S.

Listen to the signal that changed the world. 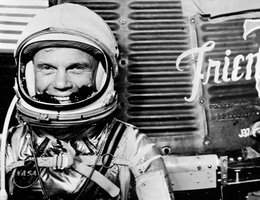 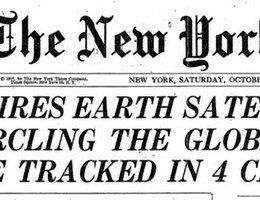 The "space race" between the Soviet Union and the United States was on. But our first attempts at catching up ended in spectacular explosions. NASA, the National Aeronautics and Space Administration, was created in 1958 to bring competing military space programs into one effort. Soon, they developed the rockets, built the space capsules and satellites and hired astronauts to become space men.

The long term effects of the space race on Nebraska and other regions of the country came in the way the space race changed the educational system and the imaginations of our people. Shortly after Sputnik, lawmakers and the public began calling for a greater emphasis on math and science in the nation’s schools. Governments put in more money, and the educational system responded. Students began to get more math and science courses.

In addition, we began to realize that there was a new frontier to be explored. Putting a man on the moon became an official governmental priority. On July 20, 1969, astronauts Neil Armstrong and Buzz Aldrin were the first humans to walk on another planetary body.

Check out the moon missions at the Smithsonian National Air and Space Museum.

Space flight became a real possibility and kids around the country and the globe could begin taking their own fantasy flights.

NEXT
The Red Menace