Other Explorers: Pike, Long, and Fremont 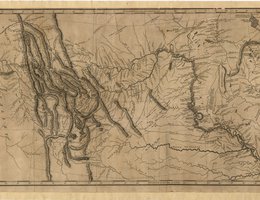 President Jefferson had expected Lewis to take the raw notes and maps of their journey and craft them into a polished “scientific” account that could be used by other explorers and later, settlers. Lewis, however, made little progress on this task before his untimely death in 1809. Therefore, the bulk of the work on the journals and maps fell on Clark who had been named the Governor of the Missouri Territory. From his office in St. Louis, Clark compiled and edited their journals and maps, including a map of their entire journey from the Mississippi to the Pacific.

Clark’s map was important. Hundreds of fur traders employed by Clark’s company would refer to his map before they set out. And as new expeditions were mounted to explore other regions in the West, the explorers would stop and learn from Clark’s map.

In turn, when they came back east, traders, trappers, explorers and even Native Americans would bring Clark new information. He would use that information to update his master map of the West. In 1814, a publisher in Philadelphia issued a two-volume journal entitled:

It included an engraved version of Clark’s map and became a standard reference for travelers in years to come.

Other explorers like Pike, Long, and Fremont greatly enhanced the geographic knowledge about the West. They made it possible for later immigrants to follow.