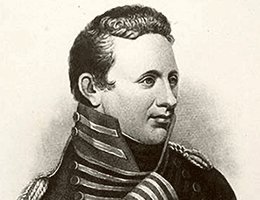 The Spanish in the New Mexico territory became very frightened about American plans when Jefferson sent out the Lewis and Clark expedition because Spain still claimed parts of the Louisiana Territory.
When they learned of Pike’s expedition, they sent out troops under the command of Don Facundo de Melgares to intercept Pike and turn him back. Melgares attempted to swing north and intercept Pike at a Pawnee village near present-day Guide Rock, Nebraska. They were unable to find Pike, who had been delayed, but they did reinforce their friendship with the Pawnee.

Pike arrived at the Pawnee camp after Melgares had left. Pike discovered a lot of evidence of Spanish trade and influence; most notably the Spanish flag flying over the Pawnee village. Pike was a highly patriotic man, some said too patriotic. It bothered him to see foreign flags waving above soil he thought belonged to his country. Consequently, Pike convinced the Pawnee to replace the Spanish flag with an American flag and cautioned them that the Spanish would no longer be allowed to enter the newly acquired Louisiana Territory. As far as Pike was concerned, he had dissolved the Spanish claims.

Pike then prepared to travel west from the Pawnee village with his men. However, the chief of the Pawnee informed Pike he could not — the chief had been instructed by the Spanish commander to prevent Pike from continuing his westward journey. The story of what happened was told by the chief himself to an Indian agent a few years later, and the agent recorded the following account in his journal:

"The morning came, and the rising sun found Pike with his men, all mounted, well armed and equipped; their heavy broadswords drawn. The old Warrior Chief had summoned his forces also, and there they stood, more than Five hundred in number, armed with Bows and Arrows, spears and tomahawks, in gloomy silence; each party waiting in painful suspense the orders of their respective chiefs. The chief recalled that he approached Pike and earnestly urged him to cancel his journey. Pike pointed to a spot in the sky just above the eastern horizon, and told the chief he would set out when the sun reached that spot, saying that:

‘ . . . nothing but death can stop us — it is my duty as I have already fully explained to you — if you think it is yours to obey the Spaniard, so to stop me, be it so: but be assured that the attempt will cost the lives of many brave men — this you may be sure of.’ "

The stage was set for a major confrontation and the suspense was almost unbearable. But the good sense and humanity of the chief prevailed. He ordered his warriors to put down their weapons and allow Pike to continue his journey.

Pike entered present-day Colorado, Spanish territory, and stopped off long enough to try and climb, unsuccessfully, the mountain peak later named for him. On February 26, 1807, he was arrested by the Spanish, taken to Santa Fe, and eventually released.

"I would not think I had done my country justice, did I not give birth to what few lights my examination of those internal deserts have enabled me to acquire. In that vast country of which we speak, we find the soil generally dry and sandy, with gravel, and discover that the moment we approach a stream, the land becomes more humid with small timber ... These vast plains of the Western Hemisphere may become in time equally celebrated as the sandy deserts of Africa; for I saw in my route, in various places, tracts of many leagues, where the wind had thrown up the sand, in all the fanciful forms of the ocean’s rolling wave, and on which not a speck of vegetable matter exhibited." 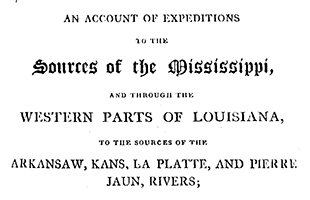 Pike also wrote in his journal that Spanish leadership in Santa Fe was weak and that it was quite possible to develop a profitable trade with Mexico. His comments stirred businessmen and politicians to consider expanding into Texas.

So if his comments about the "sandy deserts" slowed westward movement, it did not delay it for long. People were excited by the possibilities for trade with the Indians and the Spanish. Pike’s published reports contributed to the opening of the Santa Fe Trail, an increase in trade with the plains and mountain tribes, an increased use of waterways such as the Platte, and a general quickening of the westward expansion. Pike was killed in the War of 1812.