NEXT
Meriwether Lewis and William Clark

The Voyage of Discovery - Introduction 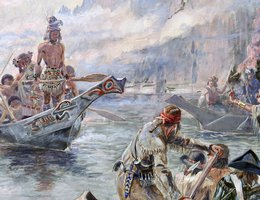 President Jefferson selected Meriwether Lewis to head an expedition that would explore the newly purchased land. In turn, Lewis asked William Clark to help him lead the first military expedition in 1804. President Jefferson had ambitious plans for the expedition including scientific observations, map-making, ethnography, diplomacy and discovery of new routes for the lucrative fur trade:

"[The] aim would be to make friends and allies of the far Western Indians while at the same time diverting valuable pelts from the rugged northern routes used by another nation [Britain] ... and bringing the harvest down the Missouri to the Mississippi and thence eastward by a variety of routes."

Lewis and Clark recruited nearly 48 men to begin the expedition (the precise number is unknown). Eventually, 31 people were part of the "Permanent Party" that accompanied Lewis and Clark over the Continental Divide to the Pacific between 1804-06. 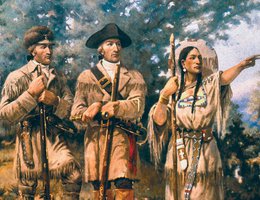 Find a timeline for the trip, plus biographies of each member, plus the complete Journal entries at this PBS website.

In addition, there was a 34th member of the Party — a Newfoundland dog by the name of Seaman who belonged to Captain Lewis. The human members of the party were mostly military men. There were the two Captains, Lewis and Clark, four Sergeants and 23 Privates. Three non-military trappers and interpreters were recruited and made the entire trip. And finally, at the Mandan Village halfway into their trip, Lewis and Clark recruited the family of 47-year-old trapper Toussaint Charbonneau, and his teenage wife Sacagawea.

The Voyage of Discovery began over the winter of 1803-04 in the Illinois Territory, where the Corps collected the supplies they would need, and they built and outfitted their keel boat. The list of supplies is long and diverse. They set off up the Missouri River from St. Louis in the spring of 1804.

NEXT
Meriwether Lewis and William Clark