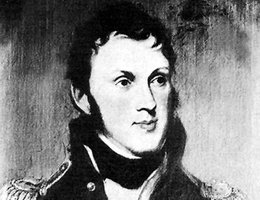 The trappers, fur traders, and river men are generally given credit for exploring the West and opening it to settlement. The Army Corps of Engineers should also be credited. Stephen H. Long was a member of this group. Like most engineers, Long was college-trained and was willing to work with the modern technology of the time. Engineers were different from the other pioneers because they had greater knowledge of geography and technology.

Major Stephen H. Long was the leader of the first scientific exploration up the Platte River. His group included several scientists who studied the geography and natural resources of the area. Long traveled about 26,000 miles in five expeditions.

His first expedition was his most famous. In July 1819, he joined Gen. Henry Atkinson’s "Yellowstone Expedition" from St. Louis to the Rockies on the steamboat "Western Engineer." This was the first steamboat to travel up the Missouri into the Louisiana Purchase territory.

In May 1820, President James Madison decided to have Long lead an expedition up the Platte to the mountains and back along the border with the Spanish colonies. Exploring that border was important since the U.S. had just completed a treaty with Spain, which drew a new U. S. border to the Pacific.

Explore Stephen H. Long’s Second Route in 1820. Long named the Rocky Mountains and his peak as he came across them.

On June 6, 1820, Long and 19 men traveled up the north bank of the Platte and met Pawnee and Oto Indians. On October 14, 400 Omaha assembled at a meeting with Long, and their chief Big Elk made the following speech,

"Here I am, my Father; all these young people you see around here are yours; although they are poor and little, yet they are your children. All my nation loves the whites and always have loved them. Some think, my Father, that you have brought all these soldiers here to take our land from us but I do not believe it. For although I am a poor simple Indian, I know that this land will not suit your farmers. If I even thought your hearts bad enough to take this land, I would not fear it, as I know there is not wood enough on it for the use of the white."

Long and his group of scientists learned much to tell the nation and had the opportunity to show the U.S. flag. 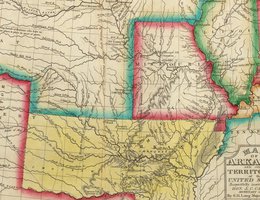 In his report of the 1820 expedition, Long wrote that the Plains from Nebraska to Oklahoma were "unfit for cultivation and of course uninhabitable by a people depending upon agriculture." On the map he made of his explorations, he called the area a "Great Desert."

Long felt the area labeled the "Great Desert" would be better used as a barrier against the Spanish, British, and Russians, who shared the continent with the Americans. He also commented that the eastern wooded portion of the country should be filled up before attempting any more movement westward. He was against sending settlers to that area. There was little timber for houses or fuel, little surface water, sandy soil, hard winters, huge herds of bison (buffalo), hostile Indians, and no easy ways to communicate. However, it’s interesting that the native tribes had been living there for centuries! By the end of the 19th century, the "Great Desert" had become the nation’s breadbasket.

There were two key results of Long’s expedition — a very accurate description of Indian customs and Indian life as they existed among the Omaha, Oto, and Pawnee and his description of the land west of the Missouri River.