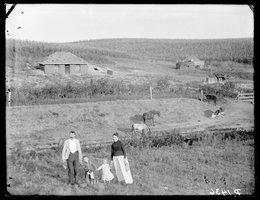 Imagine what it would be like for your family to move to a new country. You would have to learn a new language and adjust to different customs. You would most likely have to leave many of your relatives behind.

What Factors Pushed People from their Homeland? Emigrants were pushed out of their homelands for a variety of reasons. Some were discriminated against because of their religious and political beliefs. Others weren’t able to buy land, either because they didn’t have enough money or because there were too many people and not enough land.

What Factors Pulled People to Nebraska and the Plains? Even if someone decides to leave his or her homeland, it’s a big world, and emigrants could choose to go almost anywhere in it. So, in addition to the push away, there had to be a pull toward the new land of Nebraska.

The Homestead Act of 1862 was a major pull that lured immigrants westward. The promise of "free" land proved to be a real inducement to peasants who had to eke out an existence on inadequate land holdings back in Europe. One requirement of the Homestead Act was that you had to be a U.S. citizen; however, you could also qualify by declaring your intention to become a citizen. Some Midwestern areas were anxious to increase their populations and encourage immigration from Europe by publishing pamphlets and newspaper advertisements about the wonderland on the American prairies. Some states like Nebraska even created an Immigration Bureau to "sell the state" to people living in foreign nations.

The Czechs Move to Nebraska 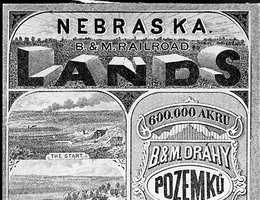 Advertisements like this one influenced Czechs to come to Nebraska
Courtesy Nebraska State Historical Society, Nebraska Trailblazer, No. 24, Czechs in Nebraska

Many immigrant groups found ways to get used to the cultural shock, and none in more numbers, proportionally, than the Czechoslovakians. Why did the Czechs (or Bohemians, a state in Czech Republic from which most immigrants to Nebraska came) leave their homeland and come to the United States and why particularly to Nebraska? Neither political nor religious reasons primarily accounted for Czech immigration to the United States. What pushed the Czechs out was worsening economic conditions and overpopulation in rural Bohemia and Moravia. Specific crises like crop failures of the 1870s, and agricultural depression beginning in the 1880s resulted in greater numbers of people leaving. Some also left to acquire greater political freedom and escape the control of the Habsburg Monarchy and constant conflict with Germans.

What pulled Czechs to Nebraska was a steady stream of advertisements and glowing reports in Czech-language newspapers and magazines published here and sent back home. Railroads, like the Burlington & Missouri Railroad, advertised large tracks of Nebraska land for sale in Czech. Magazines like the Hospodar (husbandman or farmer), an Omaha agricultural journal, helped promote settlement. Many families emigrated on the basis of information in such magazines, as well as letters from friends and relatives.

Most of the Czechs who came to Nebraska tended to be farmers, but many tradesmen and professional people came, too. Consequently, the population of many early towns was predominately Czechs. Between 1856 and WWI, over 50,000 Czechs chose Nebraska as their new home. Nebraska ranked number one in per capita Czech immigration.

The experiences of groups like the Czechs resulted in more than two-million Europeans immigrants settling on the Great Plains between 1870 and 1900. And in 1870, fully a quarter — 25 percent — of the population of Nebraska was born in a foreign country.

Where did your ancestors originate from?

Why do you think they came to America?

Who are the predominant ethnic groups living in your community today?

Why do you think they selected your community in which to live?