How Do I Get My Free Land? 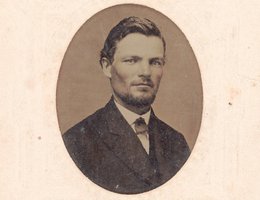 Getting free land from the government was amazingly simple. The first thing you had to do was fill out an application form that stated several facts:

This was the process that Uriah Oblinger went through in December, 1873 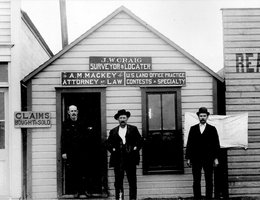 Oblinger talks of "jumping" the claim of a man who had claimed a piece of land but never lived on it. This transfer of claims was common and developed a whole industry spawning land offices like this one in Round Pond, Oklahoma in 1894.
Courtesy National Archives and Records Administration, 233-TRP-42

That was it for the first step. Next, you had to move onto the land, live on it for five years — unless you were a Union veteran — farm it, and make "improvements" like a house, barn or fences. Finally, after five years, the homesteader had to file a form labeled "Final Proof" indicating you had lived upon and farmed the land for five years, and made some improvements. Certain special acts extended the residency period in case of grasshopper devastation or drought.

The “Proving Up” Form

To actually claim ownership of the land at the end of five years, homesteaders had to complete a "Proving Up" Form. You had to prove that the improvements required had been done. And to prove it, you had to find two neighbors who were willing to swear to certain facts:

With the form completed you received your patent certificate indicating you could record your deed with the country register of deeds. You now owned the land for a total of $18 in filing fees.

Take a look at the form. Why do you suppose it’s important for you to have someone swear that they had known you five years? Why is it important for the government to know what kind of house you built?