NEXT
On The Home Front 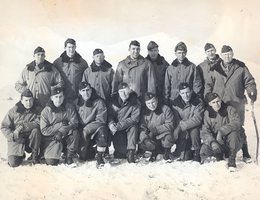 Not all of the original Nebraska National Guard served with the 134th in Europe. Companies E, F, G, and H were transferred to the 197th Infantry and served in the Aleutian Islands in Alaska.

In 1942 the 134th Infantry Regiment’s Second Battalion was selected for a top-secret mission in the Aleutian Islands. During its mission the battalion was absorbed into another unit, redesignated in 1943 as Second Battalion, 197th Infantry. Their objective was to secure control of Adak Island which would be used as a basis for later attacks on the islands of Attu and Kiska which were the only U.S. land occupied by the Japanese during World War II. The Second Battalion occupied Adak without opposition. They hoped to take part in the invasion of Attu and Kiska, but the Japanese decided to abandon the islands and evacuated all of its forces by August of 1943.

The Second Battalion eventually returned to the U.S. mainland in 1944. The 197th was then dissolved, and its soldiers used as replacements for existing units. When it became evident that the Second Battalion would not rejoin the 134th Infantry regiment, the regiment organized a new second battalion to replace what has become known as the 134th’s "lost battalion". 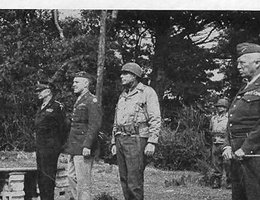 The Nebraska National Guard distinguished themselves in fierce fighting in France. The Second Batallion 134th Infantry Regiment suffered 80% casualties in one battle just south of Nancy, France.
From the 1991 NET Television program All Hell Can’t Stop Us

Miltonberger led the 134th through extensive training at various camps in the United States and finally departed from New York on May 12, 1944, for Europe. The unit arrived in England 15 days later. The unit continued its training in England and was inspected by Generals Dwight D. Eisenhower, George S. Patton and Paul Baade.

Eisenhower was especially impressed with the 134th and, "told them ... that he was a Kansas boy ... and that he was very proud of this Nebraska Regiment and he souped the men up no end."

The 134th was ready to join the fight to liberate Europe and nearly a month after D-Day, July 5, 1944, the regiment landed on Omaha Beach. The first combat that Miltonberger’s men faced was the battle of St. Lo in France. After four days of continuous fighting, the 134th occupied St. Lo. The regiment was then thrust into the Battle of the Bulge at Bastogne in December to relieve the 101st Ariborne Divison. The regiment suffered 10,000 casualties while advancing over 1,500 miles in combat during its 10 months in Europe. 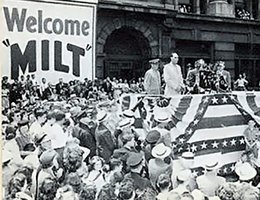 After the Battle of the Bulge in January 1945, Miltonberger was promoted to brigadier general and was assigned assistant division commander of the 35th Division, serving under General Paul Baade. At war’s end in the European theater, General Eisenhower invited Miltonberger to accompany him back to the United States for a victory tour.

Miltonberger was then assigned to special duty with the War Department personnel section. In 1946 President Truman nominated him to be chief of the National Guard Bureau with the rank of major general. He was confirmed by the U.S. Senate on February 1, 1946. Miltonberger was forced to retire due to ill health August 1, 1947.

After the war was over, members of the 134th moved on.
From the 1991 NET Television program All Hell Can’t Stop Us

He summed up his greatest accomplishment as head of the National Guard: "It is the civilian soldier who fights and dies. The Guard teaches discipline, which is needed in civil as well as military life — the whole country needs discipline today. Our program reaches into every town, every small community, to make disciplined men better peace-time citizens and better soldiers for war."

After his retirement, Miltonberger returned to his home in North Platte and co-authored a history for the 134th Regiment’s activities in World War II entitled All Hell Can’t Stop Us, the motto for the unit.

NEXT
On The Home Front