PREVIOUS
POWs Far from the Battleground

NEXT
Nazis in Nebraska

Work Details Away from the Camp

In the 1940s, many farms in Nebraska were finally able to buy tractors and become mechanized. But workers were still needed, so POW camp work details were organized. Includes an interview with a German POW who came back to Nebraska after the war.
From the 1980 NET Television program Legacies of World War II 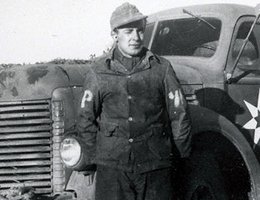 By the summer of 1943, when German prisoners of war began to arrive in Nebraska, the agricultural work force in the state was severely depleted. Farmers needed workers. So, prisoners were allowed to work in the surrounding communities. There seemed to be little risk that the POWs would escape since they were thousands of miles and an ocean away from home. In fact, one prisoner, William Oberdieck, remembered that another man was left at his work site one evening and hitchhiked back to the camp on his own. Most of those working outside the camp worked on farms or ranches, and were paid wages guarenteed by the Geneva Convention rules.

Lois Jurene Meter Odell was a grade school student in Bayard when her father employed POWs:

"Six of them worked on our farm. Dad picked them up and returned them daily. I remember the big, high fence around the prison yard. Mom felt sorry for them and fed them a hot meal at noon. They were so appreciative. The Bayard prison camp was within view of Chimney Rock, and one of the prisoners did a chalk drawing of the rock and gave it to my parents. I looked at it many times in my life, and regret that I cannot find it now."

When the war ended, prisoners were sent back to their homelands where many faced an uncertain future. The last of them left Nebraska in early 1946. But many prisoners had found their treatment here to be better than their lives at home. A few found American sponsors and later returned to live in Nebraska. William Oberdieck, for instance, had been housed at the Atlanta Camp in the middle of the state. Eventually, he got a job 200 miles away in the apple orchards at Nebraska City. After the war, he returned to work for the well-known Kimmel Orchard and eventually bought the company.

PREVIOUS
POWs Far from the Battleground

NEXT
Nazis in Nebraska