NEXT
Organized Labor & the Red Scare

In an attempt to ensure the patriotism of their employees, many cities and states enacted "loyalty legislation" during the late 1940s and early 1950s. Nebraska followed the example of many other states and passed a loyalty oath law that went into effect in August, 1951. 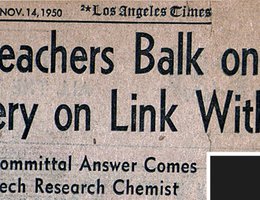 Basically, the law required all state employees to sign a loyalty oath in order to keep their jobs. That included teachers and staff in public schools and at the state university and state colleges. The oath said that the signer did not advocate the overthrow of the U.S. government or belong to any political party or organization that did. The law said anyone who lied when they signed the oath would be fired and could not hold any other job paid for by public, or tax, funds.

The law singled out teachers, and the greatest opposition to the oath came from university professors who were concerned about their academic freedom. Some professors felt that in order to teach effectively, they needed to be free to raise questions about our system of government. They were afraid that if they presented the arguments for a communist system — as a way of highlighting the differences between the two systems — they could be fired.

In response to the new law, the University of Nebraska Board of Regents said that, "Communism was not present at the university, and if any [communism] were found they [the Regents] would eradicate it."

But at least one Omaha University professor, Phil Allen, criticized the loyalty oath for singling out teachers and public servants. (This was before Omaha University was a part of the University of Nebraska system.) Allen was an Omaha radio announcer who taught speech part-time at Omaha. He said the law was unconstitutional, immoral, and intimidating. He wrote to the governor, state senators, and university administrators and encouraged them to sign an "oath of reassurance" that he had made up. Allen’s oath of reassurance committed the public officials to uphold the Bill of Rights and Thomas Jefferson’s writings. Allen said he would sign the Nebraska loyalty oath for teachers if the public officials would sign his oath.

Nationally, there were efforts to extend the loyalty oath process to students. The federal government decided that students applying for federal student loan programs would have to sign a loyalty oath. Some colleges across the country protested and refused to accept federal funds for student loans because of that requirement. At first, the University of Nebraska did accept the loans and the loyalty oath. But, eventually, professors passed a resolution opposing the oath provision. A growing number of colleges were protesting, and so President Eisenhower recommended that the oath be repealed.

But despite the questions, the law remained in force up until the late 1960s when a secretary in the Department of Philosophy at the University sued after being fired for not signing the oath. The law was finally declared unconstitutional in 1967.

NEXT
Organized Labor & the Red Scare