NEXT
The Creation of SAC

The fear of communism also affected the labor union movement in Nebraska during the 1950s. In the early 1900s, some national unions, like the IWW, Industrial Workers of the World, had adopted communists ideals in struggling to get better pay and working conditions. And so, during the Red Scare of the 50s, many assumed that unions would be full of communists who would disrupt national and local economies by encouraging strikes and violence against large companies. 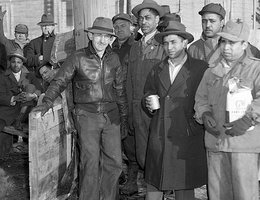 In fact, Nebraska unions were already very weak and probably contained very few who adopted communist ideals. Nebraska unions did receive a small boost during World War II as more and more workers were needed, but memberships fell back after the war ended. And in 1946, Nebraska voters approved a "Right to Work" constitutional amendment by a vote of 212,443 to 142,702. The amendment and related laws said that any worker could refuse to join a union and refuse to pay dues or fees associated with bargaining efforts, even if the bargaining resulted in better wages for all workers at the company. Supporters of the act said it would make it more difficult for communists to infiltrate union organizations and use them as a vehicle for disrupting the economic and political stability of Nebraska.

One industry that was organized was the packinghouse district in south Omaha, and packinghouse workers called a series of strikes during the late 40s. The "Red Scare" was raised during a particularly divisive strike in 1948. The Omaha World-Herald ran a series of articles on local communism around this time. Harold Anderson wrote an article on January 27, 1949, titled "Red Minority Won Rule of Omaha Union." The article quoted Patrick Ratigan, a key figure in a 1946 strike against the packinghouses in Omaha. Ratigan had been fired as a United Packinghouse Workers of America (UPWA) representative. He contended that the reason he left UPWA was because its leadership refused to sign the non-communist loyalty oaths required under the Taft-Hartley Act. Yet, the parent union of the packinghouse workers, the Congress of Industrial Organization (CIO), were often out-spoken opponents to communism.

This was a time of great fear and confusion over what it meant to be an American.

NEXT
The Creation of SAC