In late 1950, Nebraska Governor Val Peterson told the press that he had compiled a list of suspected subversives, who were to be rounded up in the event of a national emergency. Peterson’s list supposedly named many suspected communists in Nebraska, but he told the State Defense Council, only one had a job working for the state. The Governor said it was his duty to defend the state. 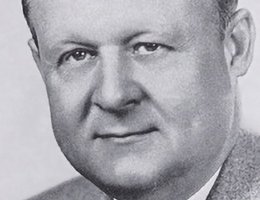 Critics of Peterson’s action said the list had little practical significance and may have been a bit of grandstanding, or playing for political advantage. Others thought such a list could result in discrimation against individuals who never had a chance to defend themselves against allegations.

There were other lists as well. According to the FBI, there were fewer than 40 Communist Party members in the entire state. A March 26, 1951 Omaha World-Herald article said that FBI Chief J. Edgar Hoover had identified 35 communists living in Nebraska.

All of this fear of the "red menace" right here at home prompted local lawmakers to try to do something about it. In 1951, State Senator Walter J. "Lefty" Williams of Ravenna proposed a law requiring all communists in the state to register. Presumably, anyone on Peterson’s list would have to register. But, the bill ran into trouble from the beginning. The Nebraska Attorney General had already ruled forcing communists to register was unconstitutional, but the parts of the bill that barred communists from public office or appearing on election ballots was constitutional. Ultimately, the bill failed to pass into law.

Even though no list of communists in Nebraska has ever been made public, the idea of such a list is still controversial. As recently as April of 1995, the World-Herald defended Peterson’s compilation of suspected subversives as a prudent step. Peterson was later named the head of the Federal Civil Defense Administration (FCDA) and was instrumental in setting up plans designed to help civilians survive a nuclear war.